iJokes For iPhone Gives Siri A Much Needed Sense Of Humor – Download Now!

The production of the AssistantExtensions tweak for Cydia has made it a lot easier for developers to produce Siri based modifications for download from the Cydia store. Rather than have to do their own groundwork and lay the foundations for hooking into the intelligent assistant, developers can simply build their modification as a plug-in to the already created AssistantExtensions framework making things a lot easier and a lot less time consuming.

I would imagine that the theory behind such a framework would be to allow developers to spend less time worrying about the technical challenges involved with modifying Siri in order to concentrate on producing some well thought out and much needed additions to Apple’s software based assistant. Unfortunately, that hasn’t always been the case and in some circumstances the ChatBot feature of the extension has been used for evil.

One of the latest examples of that evil is the iJokes for ChatBot tweak which is built upon the AssistantExtensions base and uses the ChatBot offering to give Siri the ability to tell jokes, a capability we would rather she didn’t have in all honesty. Software like Siri is only as capable, intelligent or as humorous as the person who programs it and in this instance let’s just say we wouldn’t fork out our hard earned money to watch the creator do a stand up comedy routine.

However, if Siri based comedy is something you long for then iJokes is available through the Cydia store now. As is usually the case with plug-ins such as these, the ChatBot feature needs to be initiated in the first instance by activating Siri and giving the command "let’s chat". Siri will briefly pause while she collects the required files to engage in idle chit chat and when she gives the green light, the command "tell me a joke" will prompt her to reel off her comedic finest. 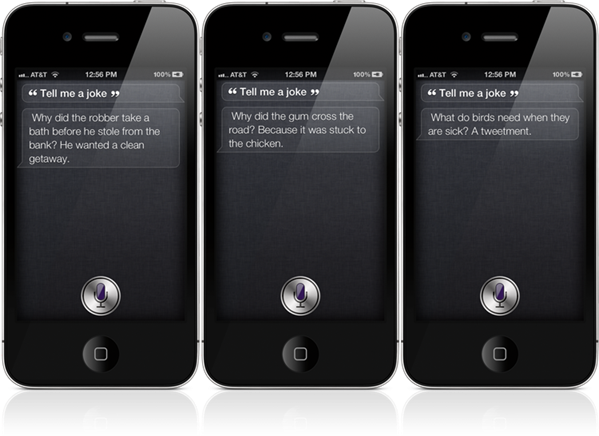 As you might expect, the AssistantExtensions tweak is a pre-requisite for this to work, with iJokes coming with AE as a dependency meaning if it isn’t already installed upon the device it will be automatically applied to the installation queue. iJokes for ChatBot/Siri is available as a free of charge download from the BigBoss repository and requires iOS 5 or above and a Siri compatible handset.