Humor: What If Siri Was A… Waitress [Video]

Siri, Apple’s famed voice assistant, has been parodied umpteen times, and has once again been utilized for the purpose of pure entertainment in a new comedy sketch. As ever, it’s pretty funny, and below, you can check it out.

Talk show host and resident prankster Jimmy Kimmel has long since used Apple products and launches as the linchpin of his entertainment, and once more, has taken Siri’s monotonous voice into a different context. This time out, the clip entitled "If Siri Was a Waitress" imagines the personified code as a real-life waitress, and as ever with Kimmel’s sketches, it’s pretty funny. 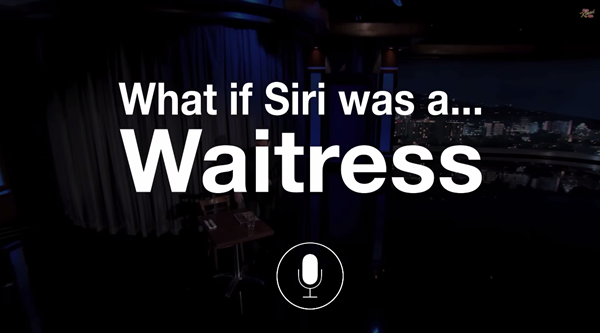 When Siri first launched, it was more of a novelty than a feature that folks would use on a frequent basis, but as time has progressed and technology has improved, Siri is becoming focal to Apple’s product line-up. CarPlay, for example, which is in the process of reaching the masses, is heavily centered around Siri, and with third-party Siri integration now a standard feature of iOS 8, users of Apple devices will soon find themselves consulting her magical powers on a frequent basis.

The hilarious clip sees Kimmel himself starring at his obnoxious beast, and given Siri’s knack for finding incorrect or inappropriate results, this short sketch highlights some of these shortcomings. For example, Kimmel asks for a coffee, and after processing the information, Siri doesn’t present the expected answer. Instead of fetching Kimmel his coffee, she instead informs him that she can list a number of local coffee shops that will serve him his beverage, and thereafter, things get even more ridiculous.

Siri mishears "Coca Cola" as the time in Angola, "Chicken Caesar Salad" as "Caesar’s Palace in Las Vegas, Nevada," and even when she finally appears to have comprehended, comes back with a cup of crickets, cheese and chowder.

At the end, the delightful concoction is passed on to a member of the audience, who then proceeds to sample Siri’s creation, and so if you’re a little squeamish, you’ll probably want to look away now.

Still, if you can stomach it, the clip is embedded below, and as ever, do leave your thoughts and comments via the usual channels.