While iOS 7’s launch hasn’t been fraught with incident like some of the previous releases of Apple’s mobile operating system, the last couple of weeks have not passed without a fair dose of complaints from certain folks within the iOS community. Apple, as we know, has added some new effects and animations to proceedings, and whilst they do serve to add a touch of elegance, not everybody has had such a pleasurable experience. In fact, some users have reported suffering from iOS 7 motion sickness after using the new mobile OS for lengthy periods of time, and trust U.S. chat show host Jimmy Kimmel to come up with a hilarious solution. Check out the video after the jump!

A new Apple release always manages to make headlines in and out of the tech industry, such is the effect that the Cupertino company has on popular culture. Kimmel regularly targets trending topics in the media, and with Apple’s new iPhone 5s, iPhone 5c and iOS 7 among the most talked-about new products of this year, it’s not surprising to see him take another humorous pop. 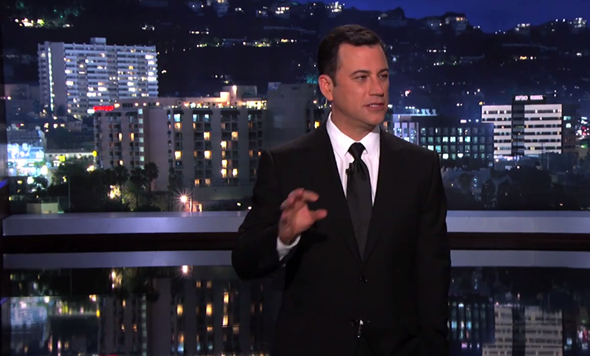 Quite a number iOS 7 users have been left feeling ill after using their devices for prolonged amounts of time, with one even having to return home from work after feeling too sick to continue. With no way, as yet, to completely disable the animations, one might suggest using a smartphone as sparingly as possible, and this is the point made – quite emphatically, might I add – by the Kimmel sketch.

The video, which carries the theme that uses should “stop looking at [their] ******g phone every 5 seconds,” is perhaps sounds advice for any mobile user, whether they’re having issues with iOS 7 or otherwise. In a world where many of us are perhaps more attached to our smartphones than would be deemed healthy, Kimmel’s hard-line approach would certainly do many people a favor in the long run.

Still, we’d never fully advocate this advice since, well, we love our smartphones here at Redmond Pie, and hey, if you’re one of the lucky few to be in ownership of the gorgeous new iPhone 5s, then you shouldn’t feel guilty or ashamed at looking at it every three seconds.

Check out the video below, and be sure to leave your thoughts with us in the comments section!