The HTC One has made waves in its very short lifespan, with commentators tripping over each other to praise the beautiful, simple design and wealth of features. As we’ve seen with Samsung and other big-name vendors, releasing a cheaper, less feature-rich equivalent handset for those with less extravagant budgets is never too bad a call to make, and having begun retailing the One for upward of 800 bucks off-contract, it would appear as though HTC is going to be doing exactly that.

The HTC One is, for all of its wonderfulness, still a very expensive toy to own, and if spending nearly a thousand dollars on a handset is simply not viable even spread over a contract, a device codenamed the HTC M4 may well be the smartphone for you.

It takes an almost identical shape to the aesthetically pleasing unibody design of the One, and is expected to retain the One branding in some form yet to be revealed. With 16GB of internal storage, 2 gigs of RAM and a dual-core processor, it’s certainly no match for the real deal in terms of performance, and when you also factor in the 1,700mAh battery and a 720p display (the One boasts an incredible 468dpi, full 1080p display as one of its marquee features), you’re left with a device quite literally a shell of its former self.

Nonetheless, one of the main reasons the One has been getting so much attention in the press is because of how it looks as much as anything else, and if you’re captivated by the etched design, but not willing to hand over bucketloads of cash for the privilege of owning the One, this soon-to-be-revealed device seems to have been made with you in mind. 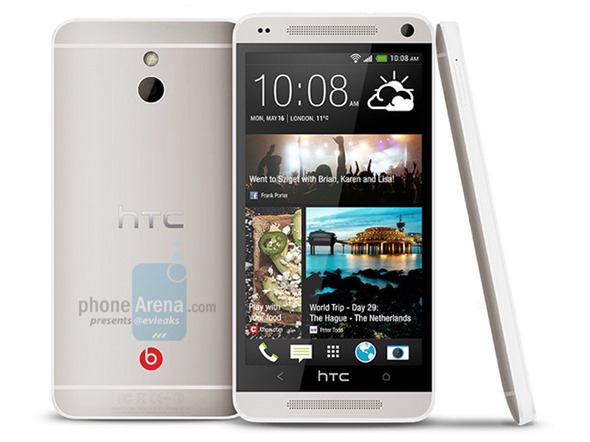 Despite the decided mediocrity of the hardware, the M4 is expected to pack Jelly Bean 4.2 right off the bat, so those looking for a stylish smartphone running on some of the latest software should keep this handset in mind. Informants of PhoneArena tout the M4 as releasing toward the end of Q2 2013, and with an LTE model also thought to be available, it’s a worthy understudy to the One.

It will be interesting to see how this new strategy will pan out for HTC. We have our fingers crossed!