With Apple actively working on the sixth-generation iPhone which is likely to see a public release towards the end of this year, users of older generation devices like the iPhone 3GS and even the original iPhone could be forgiven for thinking that the time has come to look for an upgrade or purchasing a more up-to-date unit. The core functionality of the iPhone has remained stable since 2007 but the hardware has greatly improved with each release, with the most notable changes coming in the form of the Retina display with the iPhone 4 and incremental processor and memory upgrades.

If older device owners feel that the time hasn’t quite come yet to upgrade, or are waiting for the release of the next iPhone later this year, then it’s worth looking at Cydia to solve some of the issues that are related to their device’s speed. ClockWind, one of the latest packages to hit the repositories courtesy of a budding twelve year old developer, is a package that is sure to cause some confusion amongst people until they actually get their head around how it works. The tweak can be likened to other packages such as SpeedIntensifier and exists to give the user the perceived notion that the device has become faster in the same fashion which overclocking would bring. 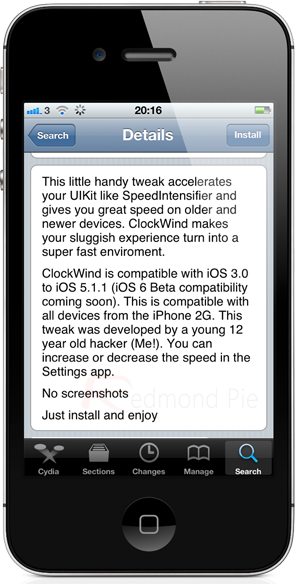 After installation, carrying out everyday tasks such as opening apps and navigating between views does appear to be a lot quicker. This is due to the fact that ClockWind doesn’t actually make any hardware changes to the processor or alter system parameters, but instead allows the interface animation speed to be drastically altered. The user-interface of an iOS app is built upon the UIKit framework which Apple provides as part of the iOS SDK. When installed, ClockWind provides nineteen different speed options to the user to alter the animation speed and give the illusion that the device has become faster, or slower, depending on the selected option. 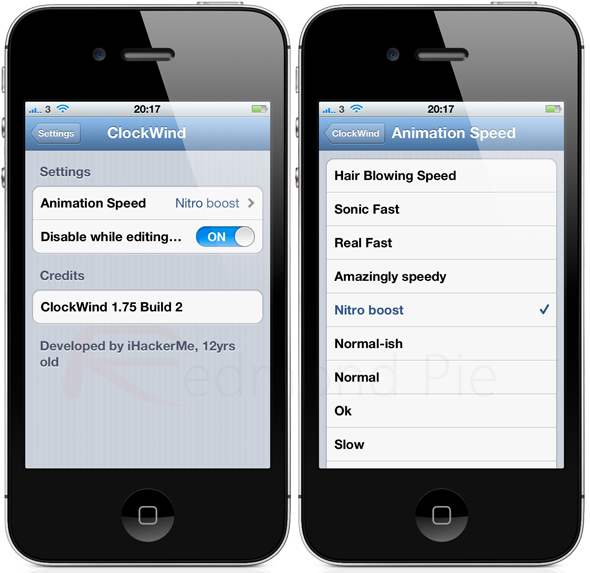 The package doesn’t offer any additional home screen icons but does come with its own preferences panel through the native Settings app. After accessing the options, users can choose to set the UIKit animation speed depending upon their speed preferences, ranging from extremely slow to blazingly fast. It is worth noting that this package, like all others of the same kind, are simply interface animation enhancements.

ClockWind is available as a free of charge download from the BigBoss repository and is compatible with all iOS devices running iOS 3.0 or above.