Of all the features that arrived when iOS 5 reached the end-user back in October of last year, iMessage has been arguably the most significant, and by now allowing messages to be sent and received in a faster, more secure manner across a variety of platforms, it has to go down as one of the best in the business.

Granted, it has its occasional downtime, but it’s not bad as is, and with the service also arriving to the Mac with OS X Mountain Lion, it will almost certainly become the sole mode of quick communication to many Apple enthusiasts.

That’s all well and good if you own a Mac, iPhone, iPad or iPod touch, but what of those rocking something bereft of that famous bitten-apple branding? Well MySMS, a service launching worldwide today, is an SMS service that synchronizes texts across mobile, web and desktop, and is not constrained to any one platform. Users sign up to one web-based account, and messages can be pushed through to anything from Windows to Android, Chrome to Facebook, OS X to iOS without a problem.

The only platform left out of the reckoning (besides Windows Phone, support of which is coming later this year), is BlackBerry, and having prided itself almost solely on its closed-off BlackBerry Messenger service for the past couple of years, it’s a real dose of irony that it finds itself being left out in the cold.

When you first fire up the MySMS app on your mobile device, it grabs your entire SMS history, and you’re then required to signup to its cloud service using your mobile number. Once logged in, it will sync all of your messages with the cloud, so whenever you send or receive a new text, it will update across all platforms – whether on Facebook, Android, or logged in to the web app. 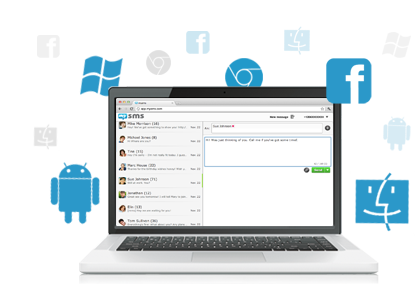 As well as aiming a few more darts at Research In Motion’s flagging BlackBerry brand, MySMS may also threaten popular services such as WhatsApp messenger, which currently allows Android, iOS, BlackBerry and Windows Phone users to communicate using one app.

It’s absolutely free, and you can take it for a whirl by heading over to this link.