How To Speed Up iOS Interface Animations Throughout The OS

Although iOS is one of the faster and more fluid mobile operating systems out there when it comes  to viewing UI animations, it seems that jailbreak fans do seem to love a good Cydia package that gives the impression that the system is performing faster that it actually is. In the past we have had tweaks such as ClockWind that existed to boost animation speed, so users perceive it to be faster than it actually is, and now we have a tweak called Accelerate that is claiming to be the revival of iOS, although we aren’t to sure that it was in such a state that it needed revival.

Accelerate essentially offers the same core functionality that was found within ClockWind and other tweaks of that nature. When enabled, the package offers users the ability to speed up all animations of the device, which is something that actually extends beyond fancy animations that are found within third-party app. The Accelerate package makes transition between views and drilling down into menus either super fast, super slow or somewhere in the middle, depending on the users’ personal preference. 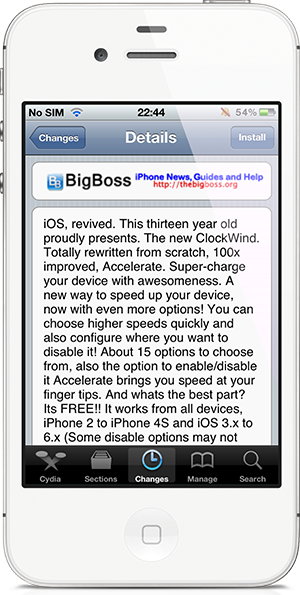 Taking an idea that has already been done and recreating it is nothing knew. However, this particular young developer has taken things a few steps further and built a fairly comprehensive set of additional options on top of the basic underlying feature. The name of the package doesn’t really do it full justice as the preferences panel actually allows a choice of twenty-four different animation speeds, ranging from the speed of light, all the way down being as slow as a lazy cat.

As well as the multiple different speed settings, Accelerate also has the added bonus of allowing the user to select certain instances when the animation speed selection is thrown out of the window. Fifteen different scenarios are built right in, including when an app closes and when opening or closing Siri. I’m sure some people will find a tweak of this nature beneficial, but I personally prefer the fluid and professional looking view changes that exist in a stock installation of iOS. The tweak also suggests that a more comprehensive package will be coming soon to Cydia for $2. I for one hope it is a little more polished and professional and does away with the “I eat impossible for breakfast” tag-lines that exist within this package. 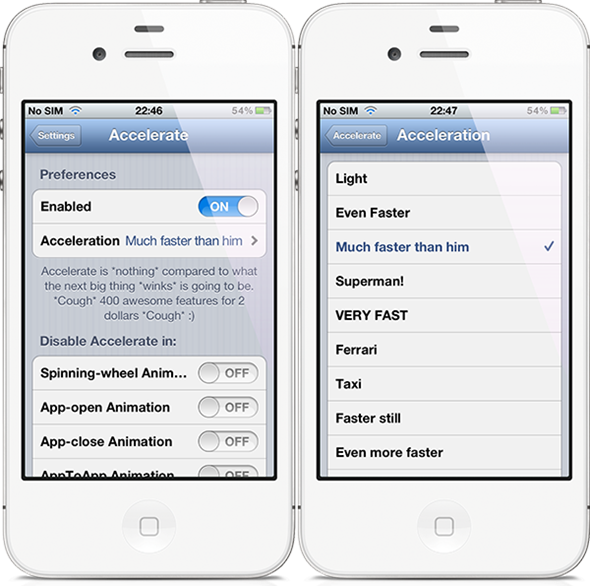 Accelerate is available as a free of charge download from the BigBoss repository and is compatible with all jailbroken iOS devices.