How To Mirror And Record Your Screen On Android Without Root

Koush – the genius behind ClockworkMod Recovery for Android – has just released a new Mirror app for Android 5.0 Lollipop which lets you mirror your screen on other devices, without requiring root access. 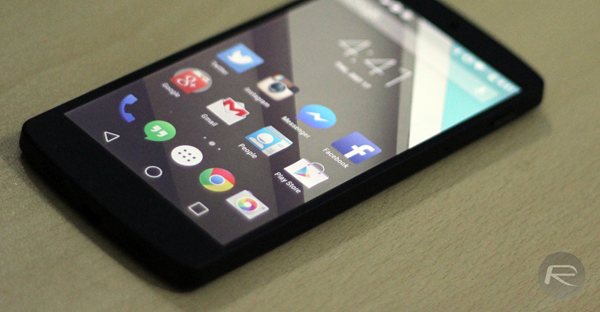 Those familiar with Koush’s work would know that Mirror is also an app that was released earlier with the same intents and purposes for older versions of the Android OS. This Mirror app however is not an update, but an entirely new release for Lollipop with the addition of screen recording and functioning without root.

Users can mirror their screen over to devices such as Chrome (not Chromebook) Apple TV, Amazon’s Fire TV and other Android devices as well. Except for Apple TV, users will have to install and set up the AllCast receiver app on the devices to link Mirror with the devices they wish to cast the screen to. 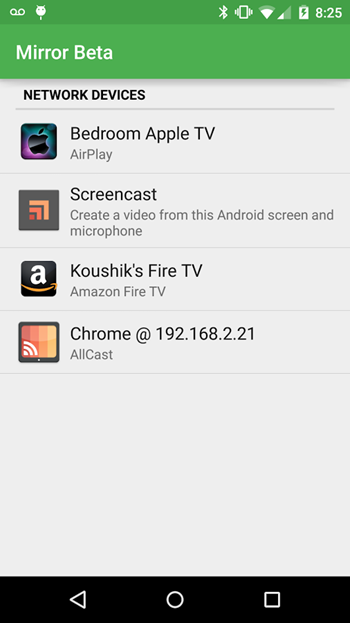 This development is a reflection of the series of apps that will hopefully follow soon in taking advantage of the new APIs in Android 5.0 which allows screen recording without requiring root access. With Lollipop still in preview stages, the ability to record, or cast your Android screen as a developer to collaborate or share developments of your projects with others should really help third-party development causes.

The road to this stage wasn’t exactly smooth and where screen recording was busy battling out the glitches and all, mirroring an Android screen wasn’t exactly a walk in the park either, with the dreaded ADB setup on your computer required. 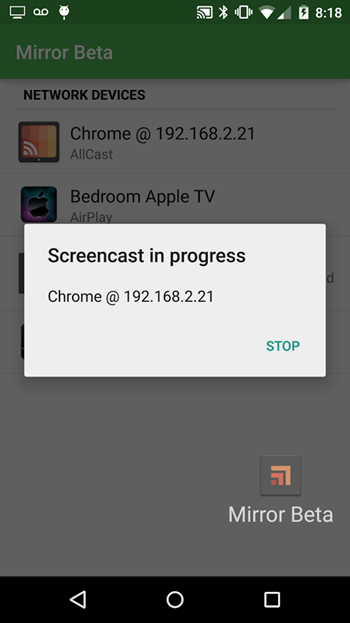 It is good to see that apps such as Mirror are taking advantage of the API in Lollipop and hopefully this move might mark a trend towards Google including more and more options that were previously available as root only features.

Mirror is available as a beta for now and can be downloaded from the Google Play Store, but lacks any options that you may wish to play around with for now. However, being a beta, there’s nothing to complain about here, and it is likely that Koush will push these out with the final release.

(Download: Mirror Beta for Android on the Play Store)