There’s little doubt the new Lightning dock connector for iOS devices is a step in the right direction. It’s much more compact than its 30-pin predecessor, which saves room within the device for more pressing hardware like the new A6 processor, and also, it’s reversible, meaning no more irritating jams and unnecessary damage when attempting to plug in the wrong way.

Unfortunately, where the Lightning dock giveth, the Lightning dock also taketh away, and while the slick new look is both practical and novel, its size means all your previous iPhone docking stations and such, are essentially useless. It won’t always be like this, of course, but at this point in time, the thousands of people who liked to dock their iPhone on their desk or beside their bed have had to do without, which is pretty bad on Apple’s part. 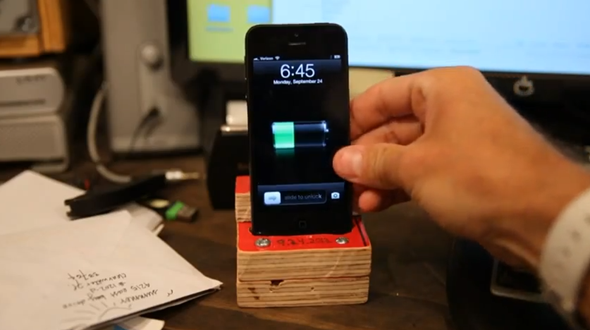 Having focused its efforts on producing enough units of the iPhone 5 to cope with the mammoth demand, the Cupertino has sacrificed a relatively basic peripheral, but one new iPhone 5 owner with a creative nous decided he couldn’t cope without his treasured dock, and rather than complain about what hasn’t been made, decided to make his very own dock.

Before you see the "making of.." clip embedded below, I feel I should note that it’s not a smooth, eye candy dock to which the iPhone 5 is perhaps deserving. Having said that, it’s a well thought-out makeshift charging stand, and will serve its creator – Casey Neistat – soundly until Apple does finally deliver a proper dock.

As you can see, it’s crafted out of bits of plywood, but any robust wood will do the trick if you fancy making your own. Also, if you find the look of Neistat’s workshop a bit intimidating, you needn’t worry, since all of the tools used to chop and shape the dock can generally be found in your garage or shed.

It’s not pretty, but kudos to Neistat for his get-up-and-go attitude to a problem which has left quite a few iPhone 5 users a little aggrieved. If you do end up having a stab at making your own dock, please do tweet in some shots of your unique creation, and please – no cutting fingers off.