How To Give iOS 7 Lock Screen A Minimalistic Makeover

The lock screen is the first port of call on almost any mobile device, and since iOS users don’t really get to change much other than the wallpaper at stock level, it’s no wonder that the recent jailbreak has seen Cydia inundated with lock screen-based mods for eager iPhone, iPad and iPod touch users to enjoy. With the all-in-one Springtomize 3 for iOS 7 on its way for those looking to tweak their home screens, SubtleLock (iOS 7) offers something similar for the lock screen. Although it’s not quite as extensive, it allows you to downscale and recolor certain aspects for a truly minimalistic approach, and if you prefer the understated look, this one’s definitely for you.

If, like me, you’re meticulous and fussy about how your device looks at all times, then SubtleLock will be your perfect companion. Wish the clock wasn’t so obtrusive? SubtleLock will downsize it. Want to modify the color or the camera slider? No problem, SubtleLock will allow you to do so with relative ease.

In fact, if you’re striving for perfection, then I would go as far as to deem this a must-download.

You can even remove the Slide To Unlock feature entirely if it grates on you that much, leaving a nice blank empty space. After all, with the patented mechanism having been around since the first iPhone dropped back in 2007, it’s fair to say that most of us are accustomed enough with how it works to not require the written instruction every single time we want to access our device. 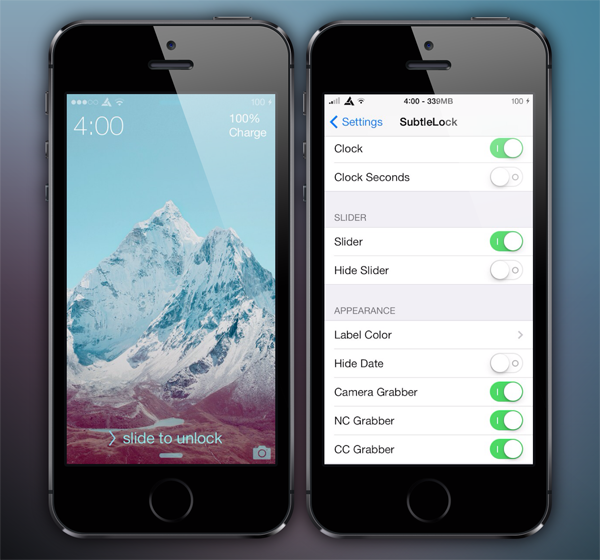 SubtleLock can be found over at the BigBoss repository, and costs just one dollar. Keep in mind, there are two versions of SubtleLock, one is iOS 6 compatible and the other is iOS 7. Be sure to download the iOS 7 compatible one, or iOS 6, depending on the OS you’re running on your iPhone.

As a side note, we can’t help but feel that SubtleLock might be a nice accompaniment to a decidedly subtle Cydia entry that we featured earlier on in the week called SimplePasscodeButtons. The tweak makes the numbers of the keypad disappear when you type in your Passcode, leaving only the outline ringlets. A win for security, a win for minimalism – a win all-round.