How To Make iOS 7 Passcode Lock Screen Even More Secure

Some tweaks are practical, meant to enhance the functionality of iOS in part or as a whole. Others, meanwhile, are designed for aesthetic flair, but while some try and fail at being both at the same time, a new, free-of-charge tweak manages to hit that cross-section between usefulness and eye-candy. It’s called SimplePasscodeButtons, and, as the name concedes simplifies your passcode’s keypad by removing the numbers from the keys.

Not only is this useful in preventing prying eyes from seeing your passcode and thus gaining access into your device, but as you can see from the screenshot below, it actually looks rather nice. 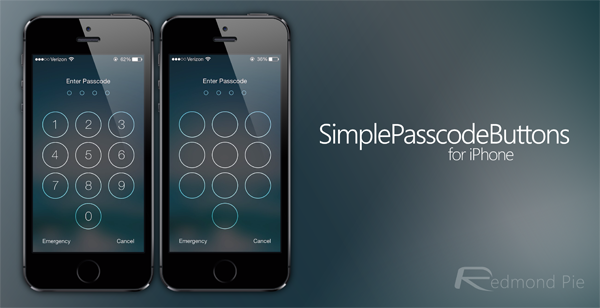 Sure, this is no foolproof, sure-fire way of stopping somebody from accessing your handset. It wouldn’t after all, take a genius to remember that the digits run from one-to-nine in ascending order with a zero at the button. But without the numbers there, it would undoubtedly make things a little more difficult to memories, and if you like to keep your private info that way – private – then this tweak won’t do your chances of achieving your goals any harm.

Besides the obvious security improvements, it does also look rather nice. Upon the removal of the numbers, you’re left with a symmetrical collection of circles, which look very much like the outline of the iPhone 5s’s Touch ID fingerprint sensor. If you’re a fan of minimalism, as our long-time readers will know we very much are here at Redmond Pie, then the SimplePasscodeButtons tweak is something you’ll want to consider.

The tweak is free of charge, and can be grabbed from the BigBoss repository, which can be located under “Sources” in Cydia. As well as being free, SimplePasscodeButtons is one of those tweaks that has no configurable settings. This is good from a de-cluttering point of view, although it does mean that if you would like to be greeted by those digits once more, you will have to head to Cydia and delete the tweak.

So, if you want to beautify your lock screen and beef up security in one fell swoop, be sure to check out SimplePasscodeButtons right now from the BigBoss repo.