LED Notifications are a great way of finding out whether your Android smartphone or tablet has any new information or notification to show you, without having to actually activate the device or turn the screen on. Not only is that friendlier on the battery, but also more convenient. However, there’s a limitation – the device has to have an LED notification light in the first place. While most of the devices out there actually have that these days, not every one them comes equipped with an LED. For such cases, there have been apps like BLN (Back Light Notifications), which uses your device’s capacitive touch buttons to double as LED notification lights. Their restriction: almost all of them require root access. What if you’re unrooted, or rock a device that perhaps doesn’t have root yet, and still want some level of notification control akin to what we have discussed above? LEDBlinker has the answer.

I remember running a version of CyanogenMod 9 on my Nexus S a while back, which showed an on-screen icon of a missed call or new message to alert the user. While that kept the screen awake and that alone is a potential downside, I was OK with that, since that was convenient and not very taxing on battery. However, that was CM – a custom ROM that was rooted. LEDBlinker Lite is a free app in Google Play Store that does the same, but while putting a colored LED simulation on the screen, customizable for different notifications from different apps. The list of supported apps is growing on an almost-daily basis, and the app itself works the same as the CM model I discussed earlier. 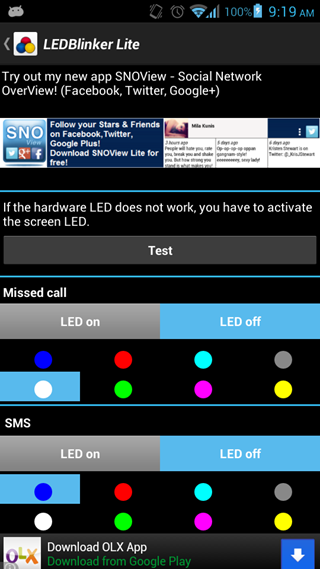 The virtual LED can be configured in up to 8 colors, and different color for a notification from a particular app. Notifications can be shown for events like missed calls and SMS, Gmail messages, Google Talk chats, Facebook and WhatsApp, and a few others. It can also alert the user when the battery is running low beyond a certain point (less than 10% remaining). You may also override the system’s own LED in favor of LEDBlinker. 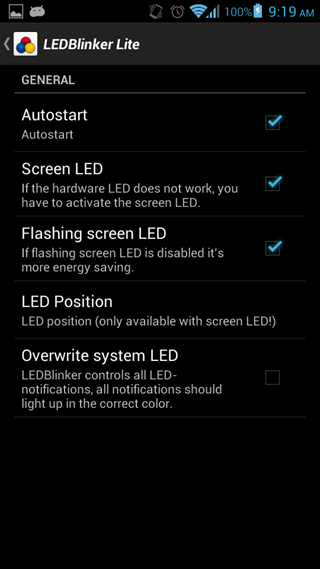 As with any app, there are both positives and negatives. The app-specific control, for instance, is available only in the pro (paid) version of the app, while the lite version works only for low battery, missed calls and SMS. Then, the biggest advantage is that you don’t need root access to run the app, hence making is compatible with any, and all Android devices. The fact that the LED shown is displayed by waking up the screen may be worrisome to some, but since AMOLED screens display black already by switching the diodes off, that shouldn’t drain your battery much if your phone has an AMOLED screen. It does, indeed, depend a lot on what device you have, that how much you’ll make out of LEDBlinker.

The paid version of LEDBlinker costs $1.29, while Lite is free in Play Store, although without the app-specific support and an ad.