How To Get iPhone X UI, Gestures, Lock Screen On Any Old iPhone Model

Two brand new tweaks have made their way into the public domain for jailbroken devices running a liberated version of iOS 11. FluidEnabler and Swiper are tweaks which look to bring the experience and visuals of Apple’s gorgeous iPhone X to older devices by mimicking a number of the more prominent areas.

First up is the relatively in-depth FluidEnabler tweak which doesn’t just look to make some visual changes but actually dives down to a hardware level as well.

Visually speaking, there isn’t a huge deal to talk about from a user-interface perspective, as, in all honesty, the biggest visual change with iPhone X is largely down to the notch on the device and how it splits the status bar up into two sections. FluidEnabler is for older devices, and therefore devices without the notch, so it really only brings the new interactive bar on the bottom of the screen which replicates the defunct Home button on iPhone X and adds in gestures-based interaction.

After installation, there’s also an attempt to replicate the tweaked lock screen that iPhone X users have. This includes two cylindrical toggles at the bottom of the display which allows a user to activate the LED flash and use it as a torch or immediately invoke the stock Camera app with a hard press.

Where the hardware changes are concerned, FluidEnabler means that Siri is invoked by holding the Power button, or what would be called the Side button on iPhone X. Screenshots are now captured with the Side button and Volume Up button. The multitasking experience is also representative of the new iPhone X experience by pressing and holding a card to actually close it rather than using the typical swipe up.

Those who opt for FluidEnbler won’t necessarily need to install the second tweak, Swiper. Swiper is basically an attempt to replicate the iPhone X lock screen on older devices running iOS 11, which is actually part of FluidEnabler. Like the former, Swiper introduces the two quick access toggles to the flashlight and the native Camera app and pretty much makes the lock screen a nicer and more visual experience. 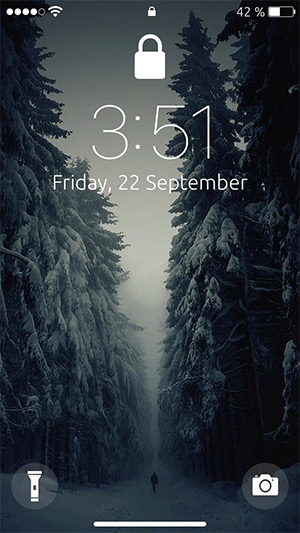 If you are jailbroken on iOS 11 using something like Electra then these are definitely two packages to try out. For downloads and installation instructions head over to the links below.