How To Enable Facebook Stickers On iPhone / iPad The Easy Way

Facebook’s been very busy of late. It launched a Facebook-centric phone with the help of HTC, and it has pushed out all manner of updates for the Android and iOS apps, partly in order to add support for Facebook Home. There’s Chat Heads too, along with the less well publicized addition of the new Facebook Stickers.

Getting Chat Heads or Stickers isn’t as easy as it may seem though, with Facebook rolling both out on a per-account basis, so it’s entirely possible that you don’t have access to at least one of them just yet. If that’s the case, we explained how to get around that little problem with a full-length guide on how to enable Facebook Chat Heads and Stickers on iPhone and iPad running version 6 of the app, and it’s not the easiest process to follow. If you’re jailbroken however, then the process is way easier when it comes to enabling Stickers, that’s where a new jailbreak tweak comes in, and it’s called Facebook Sticker Enabler.

Available on Cydia for free for anyone with a jailbroken iOS device, Facebook Sticker Enabler does exactly what it sounds like, but without all the messing around that we detailed in our previous post. Simple.

So what are Facebook Stickers? Well, that’s a good question, because we suspect that there are plenty of people who missed their release in the middle of all the Facebook Home noise that has filled the internet of late.

Simply, Stickers are a bit like Emojis, except they’re much bigger and arguably, better. They come in packs based around these, and some are free whilst others need to be paid for. Facebook isn’t the first to use the Sticker method, but it’s no doubt going to be one of the most popular. We won’t be rushing out to use them ourselves, but then we’re probably not the target audience for Facebook Stickers! 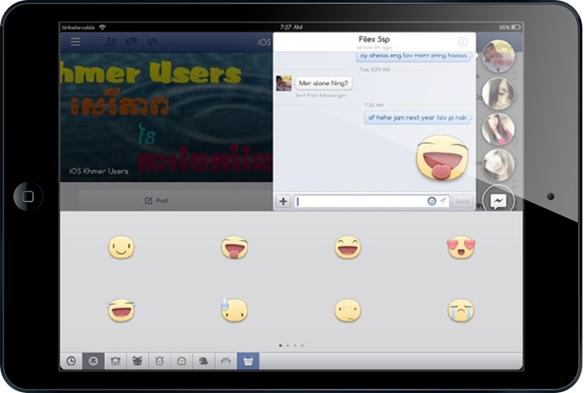 Of course, while you need to have a jailbroken device in order to make this work, it’s worth remembering that both Stickers and Chat Heads will eventually be available to everyone. With that in mind, it’s possibly not worth heading out to jailbreak your device just for Facebook Stickers.