How To Enable Android Wireless Hotspot Tethering Without Root

For me, one of the greatest features of the smartphone is the ability to tether out a connection to a computer, laptop, tablet, or any other compatible Wi-Fi or Bluetooth-enabled device. When on-the-fly, it means I don’t have to waste any time sourcing a decent hotspot, and can instead get on with the task in hand. While most smartphones offer this feature natively though, often it is hidden which means you can often browse the Web on your smartphone, but cannot replicate the experience on your external device. Hotspot Control from Chainfire is a nifty little app which will enable (or indeed disable) the hotspot feature of your Android, and so if you’ve been having trouble accessing your hotspot settings, you may want to give it a try.

It’s worth clearing up, first and foremost, that this is not one of those apps that brings a hotspot to devices that don’t support it. There are such apps in existence, of course, but most of those require at least root access in order to function. Hotspot Control operates under the presumption that your device already has hidden hotspot functionality, and since it doesn’t require root, is a great way for almost anybody to create a hotspot free of charge. However, according to the description of the app “On some devices that do not have a cellular data connection capability (like the Nexus 10) the hotspot will not give out IP addresses – the app will auto-detect this situation and fix it, but root is required for that option”, so that’s one place where you’ll need root, otherwise, not needed.

As well as facilitating a stable, reliable and (optionally) encrypted Internet connection, another instance whereby Hotspot Control may also come in useful is when your handset is lacking a SIM. When the SIM is removed from some devices, the hotspot feature disappears as if it was never there in the first place, but while you would need one inserted to get onto the Web, you can use Hotspot Control to create a secure, local-only private access point to suit your requirements. 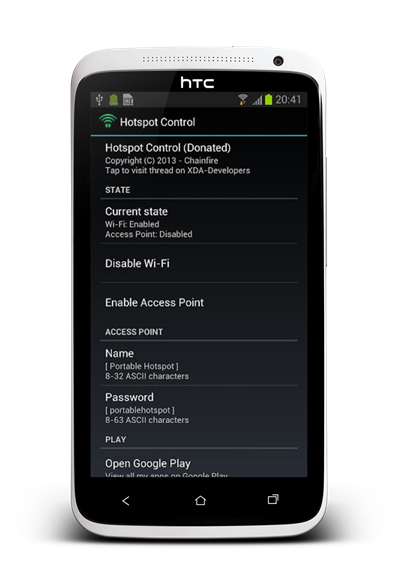 You can customize your access point (name of your hotspot) to whatever you like, and with WPA2 AES + TKIP encryption, your private network won’t be an open book for everybody to connect to.

Please note, this is not one of those apps designed to circumvent tethering restrictions beset by your carrier. Although it may help you get around them, you could well be migrated onto a higher-paying contract or worse, so if you plan on trying some unauthorized tethering, proceed at your own risk.

(Source: Hotspot Control for Android on the Play Store)