How To Download Torrents Directly On Windows Phone 8 Smartphones

Usually, the utility of torrent downloaders remains limited to desktop computers, and the concept of downloading torrents on smartphones and even tablets remains somewhat alien. The whole idea of grabbing torrent based content on the move also gets bogged down by the fact that there isn’t much variety of torrent clients available for major smartphone platforms, such as iOS, Android and Windows Phone.

This scenario is changing rapidly now, as developers seem to have realized that with ultrafast mobile internet in the form of 4G LTE accessible on the go, and storage upwards of 32GB on most modern smartphones, people would want to download content no matter where they are. A while ago, we told you about the availability of the official uTorrent app for Android. Now, Windows Phone 8 has also joined the foray, thanks to wpTorrent – a third-party torrent client for all your downloading needs on Microsoft’s WP8 smartphones. 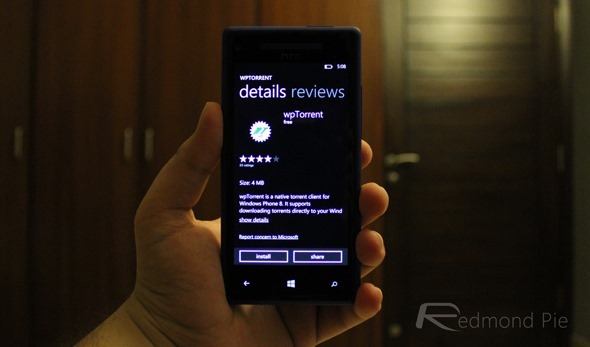 There’s nothing too fancy about wpTorrent, which carries a black interface and follows the basic guidelines of the Modern UI design. It offers a general overview of all the torrents that you have in progress, the files that you have downloaded, and basic settings. While downloading torrents is pretty easy and straightforward, looking for them isn’t much pleasant, especially since on Windows Phone 8, unlike Android, you cannot search for torrent files through your browser and subsequently load them into wpTorrent manually.

The official list of supported features includes things like support for magnet links, defining different priorities for several downloads, limiting the up/down speed, configuring ports etc., as well as featuring a native media player for audio and video files that will let you stream content while it downloads. Then, you get a file manager with web server support, so you can not only take out the downloaded files from the device’s memory, but share them with virtually anyone on the same HTTP network. Torrents based on RSS feeds can also be captured through wpTorrent, and the icing on the cake comes from the app’s ability to intelligently adjust its behavior depending on the power capacity left on your device. 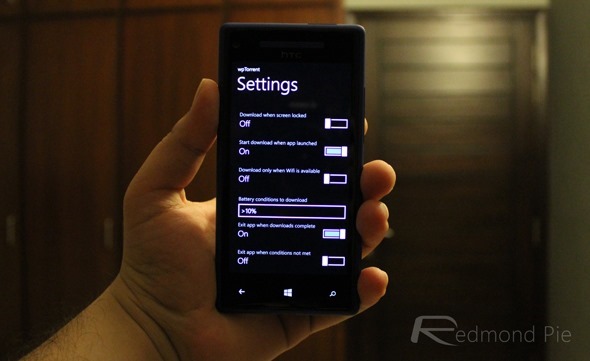 wpTorrent is available for Windows Phone 8 exclusively, and comes in a free as well as $3.99 paid variant. The free version is ad-supported and limits download speed to 200 KB/s. It can be grabbed at the source link below.