How To Downgrade iOS 8.2 On iPhone Or iPad [Tutorial]

Want to downgrade iOS 8.2 back to more stable iOS 8.1.3? The following step by step tutorial will help you do just that on iPhone or iPad.

iOS 8.2, the latest edition of Apple’s mobile software, has brought forth quite a few new features, but unfortunately, also includes its fair share of bugs. If you’ve been using the latest firmware and encountered issues relating to battery, Safari and whatnot, there’s some light at the end of the tunnel, because since Apple is still signing iOS 8.1.3, you can downgrade with relative ease. Find out how, after the break.

The first think to note about this downgrade is that it won’t allow you to achieve a jailbreak of any kind. Like iOS 8.2, iOS 8.1.3 is not yet jailbreakable, and thus, by reverting to iOS 8.1.3, you are doing so mainly to avoid the performance issues associated with iOS 8.2. 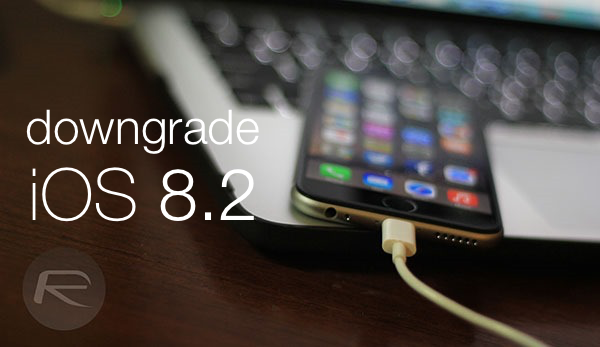 The iOS 8.2 battery related problems have been well documented, but there are other problems besides. Safari, for instance, is also relatively buggy on iOS 8.2, and if you rely on the native browser day-to-day, dropping back to iOS 8.1.3 should stand you in much better stead.

The fact that Apple is still signing iOS 8.1.3 is what makes this little downgrade trick workable, but please bear in mind that this is a limited-time loophole, and once Apple ceases to sign iOS 8.1.3, you will be stuck with iOS 8.2 until an update is rolled out in the future.

Still, without further ado, here’s what needs to be done:

Step 1: First and foremost, back up your iOS device. You can do this via iCloud, or indeed through iTunes, but since you’ll be restoring, having your data somewhere safe is a necessity.

Step 3: Launch iTunes, hold down the Option key (Mac) or the Shift key (Windows) in iTunes, and select the Restore iPhone option. Find the IPSW that you grabbed in Step 2, and select it.

Step 4: Once iTunes has worked its magic, you should be able to enjoy a relatively bug-free iOS experience on 8.1.3.

To reiterate, the ability to step back to the more stable iOS 8.1.3 is not indefinite, and so if you are having difficulty with iOS 8.2, please follow the above steps sooner rather than later to avoid being stuck without the choice.