How To Disable iMessage Typing Notification On iPhone

Since first making its debut with iOS 5, iMessage has proven itself as a great way for one to share messages between any iOS device, provided a cellular or Wi-Fi connection is present. It’s generally secure, rarely drops service, and is a lot quicker and more reliable (and often cheaper) than the traditional SMS. However, it is not perfect, and like so many of iOS’s key features, it’s annoyingly difficult to customize. The options for tailoring the experience to suit one’s needs are scarce, but if you have always been annoyed by the fact that a user on the other end receives that little speech bubble to indicate that you’re typing, well, there’s a tweak to rectify that!

Apple loves doing half-jobs when it comes to iOS. Like, your privacy is enhanced by the ability to remove the ‘Read’ report, but then compromised when you begin typing a reply, because the person you’re in conversation with knows you’re typing. To code the option by means of a toggle in the Settings app would not have been a massive stretch for Apple, but luckily, one Cydia developer has saved the Cupertino company the trouble.

Called TypingPrivacy, the tweak provides the very toggle Apple ought to have included in the first place, and once installed, allows you to easily switch the feature on or off within the Messages wing of the Settings app. To be honest, if you’re downloading such a tweak, it’s highly unlikely you’d want to go back to showing your typing habits off once more, but it’s always nice to have the option there if needed.

TypingPrivacy can be found over at the BigBoss repository (a default source in your list upon jailbreak), and costs just $0.99. If you’re jailbroken, this is the kind of tweak you really should have on board. It’s minimal, slots nicely in as though it were a native feature, and ensures you can maintain your privacy when using iMessage. 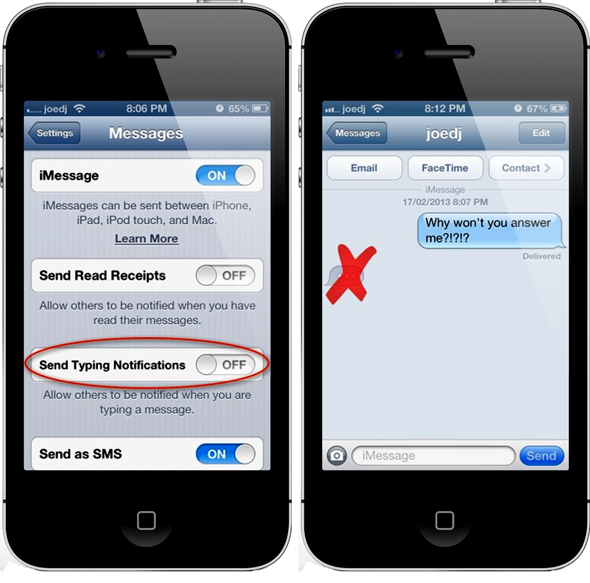 Of course, you will need to be jailbroken in order to install the tweak, but it works with all devices, and also a bunch of jailbreak messaging apps including BiteSMS, IntelliScreen X and Messages+.