How To Dial A Contact Directly From The iPhone Lock Screen

There is a new jailbreak tweak, named Exigency, out today on the Cydia store which in my opinion is worth checking out. This small and lightweight tweak comes from developer rvirajm and can be thought of as more of a small phone based utility rather than a large functional installation that will greatly enhance the feature set of the iPhone.

Users who choose to go down the Exigency installation route will find themselves with the added ability to make contact with someone from their address book directly from the lock screen. It may not seem as an earth-shattering functionality at first, but considering that Apple natively doesn’t allow any local phone calls to be made when the device is locked, for that it is definitely a feature worth having. Of course, there is an exception to the no lock screen calling rule, which comes into effect when the Passcode lock is set on the device, but even then only emergency calls are permitted. 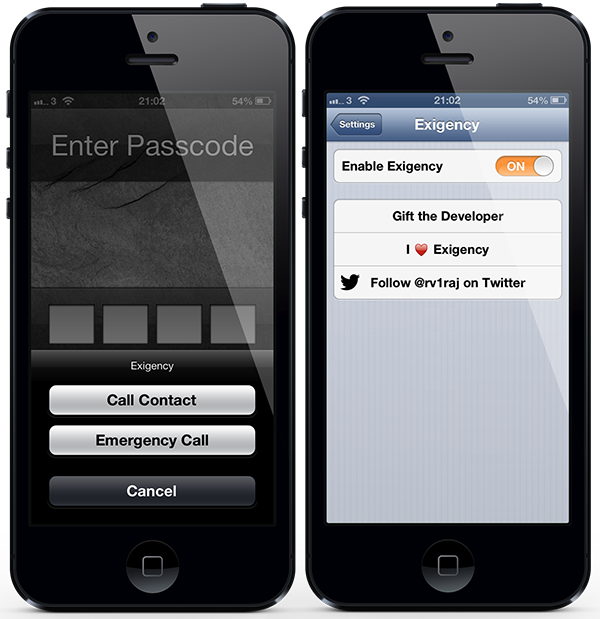 With Passcode and Exigency active, tapping the Emergency Call option from the lock screen will present a standard iOS Action Sheet that allows the user to decide whether or not they want to go through with the native emergency calls process or if they would prefer to make an outgoing call to a friend or family member from their stored contacts on the device. Selecting Emergency Call option simply hands responsibility back to Apple’s standard iOS workflow whereas choosing Call Contact option immediately opens the Contacts.app on the phone.

Although Exigency does offer a nice little phone-based feature for those who might be into that sort of thing, it is only really relevant for those that opt to have the Passcode lock enabled on their device. Due to the fact that the whole thing is activated through the Emergency Call option, it requires this feature to be enabled. It is also possible to enable or disable Exigency through the native Settings.app when installed.

Exigency is available as a free-of-charge download from the ModMyi repository and requires a jailbroken iPhone running iOS 6.0 or higher.