We first caught wind of Philips Hue last year, and at the time, we were rather impressed by a technology allowing us to control different colored light bulbs right from our iOS devices. Since March, the API and SDK for Hue light bulbs has allowed developers to take advantage of and manipulate the bright and colorful rays shot by Hue, but naturally, we’ve only seen mainly mobile apps hitherto. A new offering for Mac, which goes by the name of Hue Menu, offers a multitude of options in helping you find that perfect ambient glow.

Although it stands to reason that Hue would appeal to the mobile market more so than the desktop, it’s also worth noting that most of us spend a substantial proportion of our days using a computer or notebook. Thus, the creators of Hue Menu have brought us something for when picking up an iPhone is not as practical, and with a decent array of features, will allow you to tweak your Hue bulbs to your precise tastes. 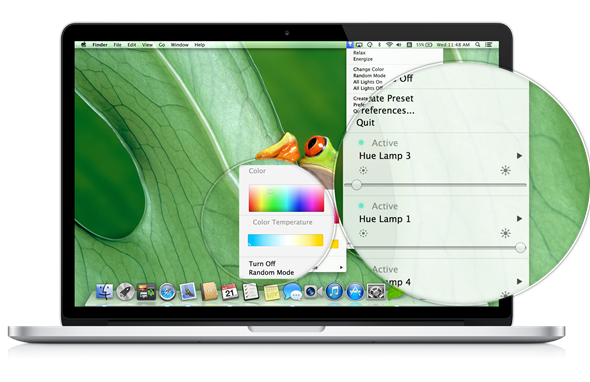 Once installed, Hue Menu sits itself in the OS X Menu Bar, and as well as the ability to switch the bulbs on or off, there are also controls for brightness, color tweaks, and other such niceties. The interface makes it easy to apply different settings to different bulbs, and with developer Charles Aroutiounian promising some exciting new features like geofencing and alarms, it could prove to be the perfect desktop companion for any Mac-owning Hue fan. 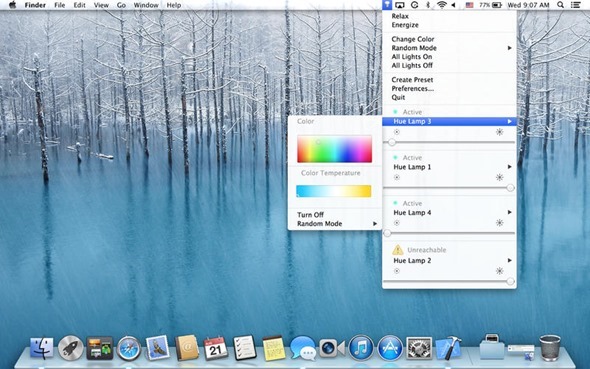 Hue may be something of a toy to many, but there’s no doubt that they have a kind of “cool” factor about them – something that has helped the product gain a fairly strong following over the past twelve months. With Hue Menu being one of the first to bring such controls to OS X, many Hue fans, including this one, will be hoping to see more such apps in the future. 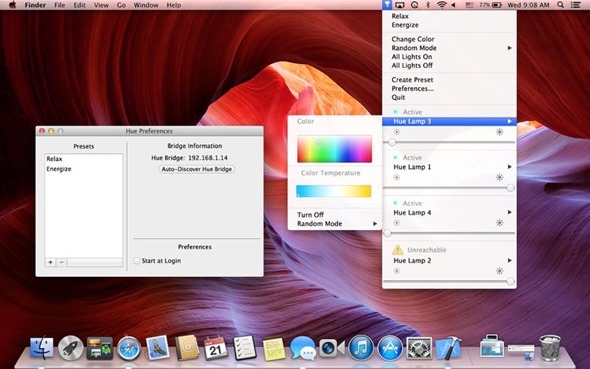 We’ve already seen some of the interesting ways that Hue can be used, including the Ambify for iOS app that allows you to create your very own, all-singing disco using Hue, and with LightStrips and Bloom Bulbs on the agenda, Hue certainly has a bright future.

If you have a Hue setup at home, and own a Mac, then we definitely recommend giving Hue Menu a shot. It costs just $2.99, so it won’t cause a big strain on your wallet.