Although the Apple TV is still officially classed as hobby project for Apple that takes its place behind the likes of the iPhone and iPad, it is a piece of kit that is growing in popularity and prominence with more units shipping each quarter. Apple have showed recent signs of taking the Apple TV more seriously with the addition of streaming content such as the iTunes Festival and their own media event keynotes but until they add some powerful extensions and features, it may continue to live as the company’s hobby creation. Thankfully, the jailbreak world loves to pay attention to unloved iOS devices and it now seems possible to control the Apple TV using basic voice commands.

There have been plenty of rumors flying around in the first half of 2012 that suggest Apple may be in the process of bringing out an actual television set that will be voice controlled using the Siri software, but until that happens the next best thing may be integrating voice commands into an existing jailbroken Apple TV set-top box. To get these commands up and running the user will require a jailbroken Apple TV unit as well as a jailbroken iPhone or iPod touch that has Siri turned off and reverts to the old-fashioned voice command functionality. With all pre-requisites in place, follow the steps below to get up and running.

Note: You will need to have a Apple TV which is jailbroken and has aTV Flash installed.

Step 1: With the jailbroken Apple TV unit connected to a high-definition TV make sure that aTV Flash is installed. From Maintenance->Manage Extras option, install AirControl.

Step 2: Invoke Cydia on the jailbroken iPhone and locate the VoiceActivator tweak that was developed and released by Grant Paul – also known as chpwn. VoiceActivator allows custom voice commands to be set up on the device that then invoke unique features.

Step 3: Open up the Settings application on the iPhone and enter the VoiceActivator settings. Make sure that the tweak is enabled via the given toggle before selecting Add Command. 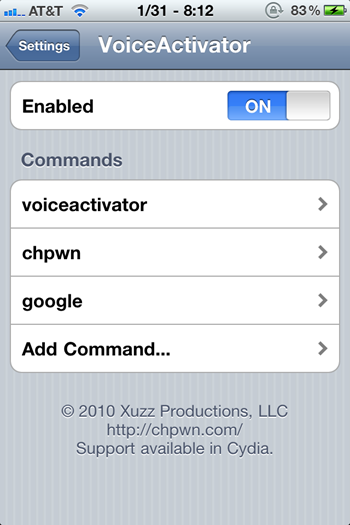 Step 4: Add the word Home into the command prompt box before choosing the Open URL option. When asked to configure the command, insert the following URL: http://IPaddressofAppleTV/remoteAction=1 where IPaddressofAppleTV is the IP address number your Apple TV is connected to on local WiFi network

Step 5: Save and exit VoiceActivator settings. On the Apple TV, select option that takes you away from the home screen. For example, open up the settings menu. On the iPhone, press and hold the home button to invoke the voice command feature and say the word "home". The command should be delivered to the Apple TV via the entered URL and magically take you back to the home screen.

In order for the commands to work and be transferred successfully, both the Apple TV and the jailbroken iPhone need to be connected to the same wireless network. The process would be pretty limited if all you could do was skip back to the main home screen so see below for a list of additional commands, all of which need to have their own Voice Activator command set up on the iPhone.