How To Boost Your Mac’s Sound Volume, Improve Audio Quality

If you’re a Mac user getting to grips with Apple’s latest OS X Yosemite operating system, who also happens to listen to a lot of music, watch a lot of streaming media or just love browsing sites like YouTube, then configuring the Mac’s sound output with Boom 2 could be the smartest thing you would do today.

A large number of Mac owners who have found themselves less than impressed with the native sound quality of their Mac will already be familiar with the original Boom software from GlobalDelight. The first iteration of the Boom series managed to collect a loyal following due to the fact that it did a fairly impressive job of noticeably improving the outputted sound quality on a range of Macs. Boom 2 is the evolution of that original product, bringing with it additional power and functionality crafted specifically with Apple’s OS X Yosemite in mind. 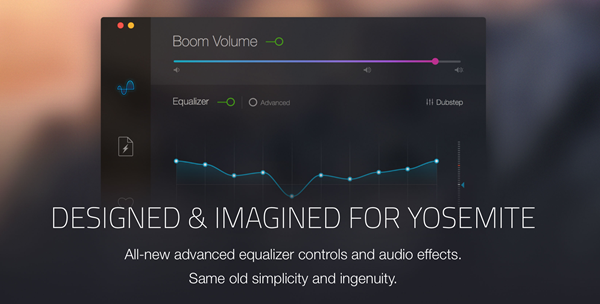 The good news is that the same core functionality still exists within Boom 2. Installing the app, and allowing it to configure automatically, will provide a system-wide audio upgrade on your Mac, resulting in noticeably improved audio quality.

The similarities with the original iteration of the product end there. GlobalDelight has taken things even further to not only make your Mac audio louder, cleaner and crisper, but have also introduced customizable features such as advanced equalizers, intricate frequency controls and multiple audio effects. All of which can be altered by the end-user with minimal fuss.

Considering users are slowly being brainwashed into thinking mobile and desktop applications and utilities are throw-away purchases, there will undoubtedly be those who think the $14.99 price-tag is steep. However, considering the software has been lovingly crafted to perfectly fit in with the look and feel of OS X Yosemite and extended to be fully customizable, it seems like a steal. Plus, the developers also offer a free seven day trial directly from their website.

You can download Boom 2 by pointing your browser to the following link: globaldelight.com/boom/ and remember, be sure to go for the trial first before parting with your cash, because there’s a chance you’re living with a busted speaker unit in your Mac which even software mightn’t be able to fix.