Google is a little bit obsessed with trying to make sure that the experience of using its Android and Chrome OS devices is as enjoyable as possible. To that end, the company has been carrying out tests that it hopes will show the latency endured when a user touches a screen, with the time taken between press and something being drawn on screen being measured. Google may not have been making too much noise about this testing process and you can be assured that other companies are doing the same thing with their platforms, but Google is the first to give us a look behind the curtain.

Posting on Google+, Google’s François Beaufort, a ‘happiness evangelist’ has lifted the lid on some of the testing work that Google has been carrying out. The whole thing involves a rather scary looking piece of equipment that it calls Touchbot. The Touchbot is actually built by the Finnish company OptoFidelity and it “measures end-to-end latency of Android and Chrome OS devices.” The Touchbot’s job is to point and prod at the screen it is being told to test, with a camera then measuring how quickly or how slowly the resulting image is drawn on-screen. 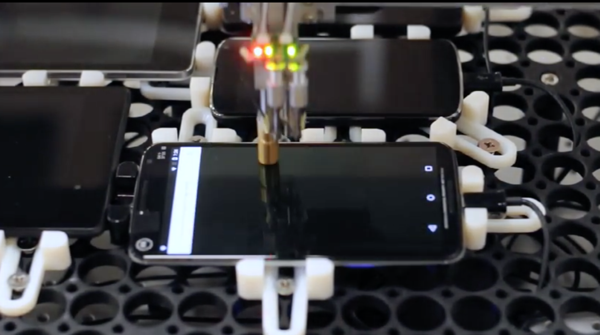 Lag can be the biggest reason that a device, be it smartphone, tablet or notebook computer feels slow. Users expect to receive instant feedback when interacting with a device, and if on-screen actions happen too long after a touch or press, the resulting lag can be just enough to ruin the experience. Just compare a low-end Android phone with a high-end one and you will see what we mean.

Android has historically suffered with lag when compared to Windows Phone and iOS, possibly due to the proliferation of low-end hardware in the market. Google is clearly working to improve responsiveness and lag across its platforms, and it’s using a pretty impressive bit of kit to do it.

Long may it continue till lag is turned into a bad and distant memory.