If you are the type of person who repeatedly purchase Apple products, specifically the iPad 2 and the new iPad, then the chances are you recognize quality when you see it. Regardless of what public opinion may be about Apple, it is extremely difficult to argue against the quality of their products, with each one offering the build you would expect from a premium priced consumer gadget. Products such as the iPad and iPhone are built to offer extensive functionality, but also stand the test of time which is highly evident when you consider the fact that the iPhone 3GS and original iPad still perform better than a lot of newly released competing devices.

So if you own an iPad 2, or even the new iPad, what is the next step? The iDevice accessory market is a rapidly expanding industry, with peripherals and add-ons being thrown at the consumers left, right and center. Products such as cases, stands, screen protectors, docks and cables are available from a multitude of suppliers; catering to all price bands ranging from the budget-end, all the way up to super-premium, and everything in between. One such provider of accessories are Twelve South, who create unique and innovative accessories exclusively for Apple products. One such accessory that has been gaining serious traction on the world wide web is the HoverBar, designed for the iPad 2 but as my tests show that it does also work on Apple’s latest Retina-toting iPad. The HoverBar is essentially a sturdy, adjustable arm that can pretty much clamp to anything up to one inch in thickness and hold the iPad in place for secure viewing. 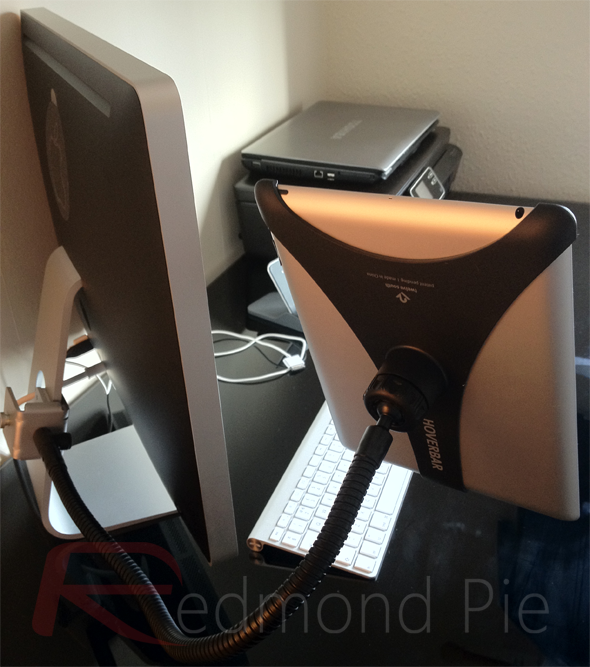 One of the major benefits of such a product is that it can make itself perfectly at home clamped to the ‘L’ stand of an iMac, allowing the iPad to be used as a secondary touch-screen whilst working. Perfect for flicking through iBooks with a reference manual, playing a movie or watching some television whilst working. That isn’t the only use, and the fact that the attached clamp can grip pretty much anything that is one inch thick or less means that the HoverBar can provide some iPad viewing goodness in a wide range of situations. The official Twelve South page shows that the HoverBar can be attached to a standard work desk and in the kitchen to flick through your favorite recipes but it could pretty much be used in any situation you can think of as long as it stays within the product’s technical constraints.

Upon delivery, the HoverBar jumps right out at you as a premium product. The product comes delivered in a custom made, sturdy box that is fitted out with shaped black and red foam to protect the device. Each component which makes up the final bar has its own home in the box, just waiting to spring into life. The box itself contains the adjustable arm, the clamp, the actual iPad holder, an Allen key to tighten the clamp as well as four cable clips to attach a USB cable along the arm itself. The packaging is very ‘Apple-esque’ with no space being waste, every inch used for purpose. 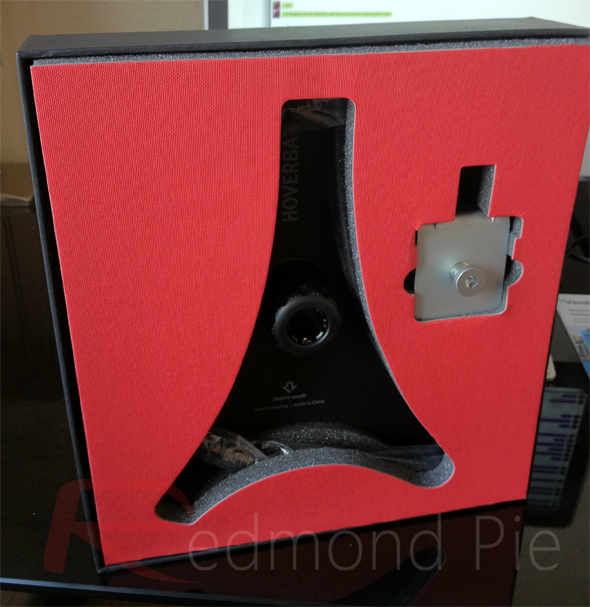 So everything sounds great. It looks good, is packaged well and feels like a quality product, but is it? Well the simple answer is yes, yes it is. The attached instructions allow the HoverBar to be setup in less than five minutes, with video tutorials being available if required. I have purchased previous products of similar nature that come with warnings such as "Don’t suspend your device higher than you are willing to keep it from falling" which is something you really don’t want to read on a product whose prime purpose is to suspend your device. Fortunately, Twelve South don’t feel the need to offer such warnings with the HoverBar, and after feeling the metallic quality of the adjustable arm you can see why. The clamp that provides the main support is like something you would find in an engineer’s workshop, but still manages to look elegant and fits in with the design of Apple products. 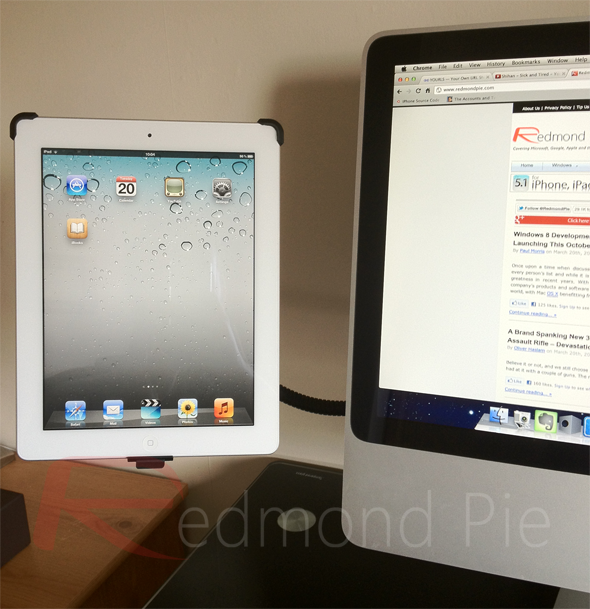 The one issue that I did have with the HoverBar was actually adjusting the arm to give me the perfect angle when attached to the iMac. Every time I attempted to adjust it, I seemed to only succeed in unscrewing the arm from the clamp. The setup of the product took me less than two minutes, achieving the right angle for my iPad took about ten minutes. I entirely concede however, that the angle issue could be entirely down to my own incompetence, so let’s not dwell too much on that. One thing to note is that the official site just say that the HoverBar is designed for use with the iPad 2. All of my tests of the product, and the images shown, were carried out with the new Retina-ready iPad which seems to fit in the holder without any issue whatsoever. 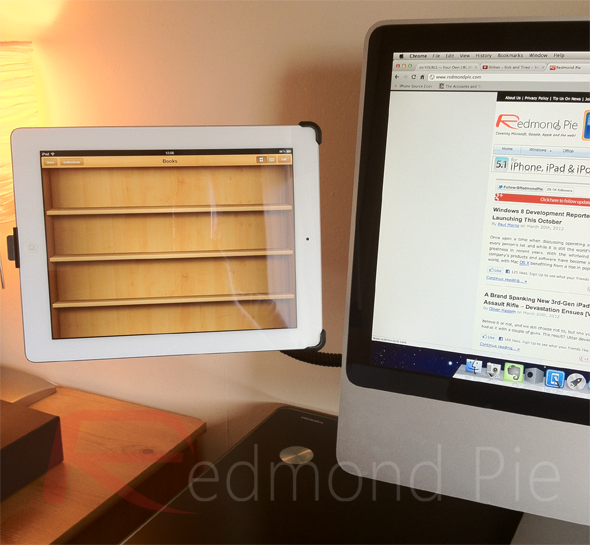 At $79.99, the HoverBar may seem expensive to some, but when you consider the longevity of the product, how well it is actually manufactured and packaged and the fact that it will more than likely become as important in your gadget loving world as the iPad itself, it doesn’t seem like such a high price to pay. HoverBar is available directly from Twelve South with free shipping to the United States and flat rates to a host of additional countries.