Hidden iOS In The Car Feature From iOS 7.0.3 Gets Video Demo

A week ago, app developer Steven Troughton-Smith revealed some interesting screenshots regarding the forthcoming iOS in the Car feature from Apple. Although it is unknown when exactly the grand roll out will commence, Troughton-Smith’s findings manifested through a beta build of iOS 7.1, and as such, we anticipate that the final version may well include the new automobile-friendly implementation. Since last week, the well-known dev has been digging into iOS 7.0.3 and discovered that certain features of iOS in the Car are already present (albeit hidden) deep within this release, and using the iOS Simulator, has posted a clip onto YouTube, offering – for the first time – a brief glimpse of the dash-tailored system in operation.

Although 800×400 will likely be the default for in-car displays, iOS in the Car does indeed support a multitude of different resolutions, according to Troughton-Smith. Allied to optimization for external displays, there’s also said to be touch-based control support, hardware controls, and, of course, voice input. 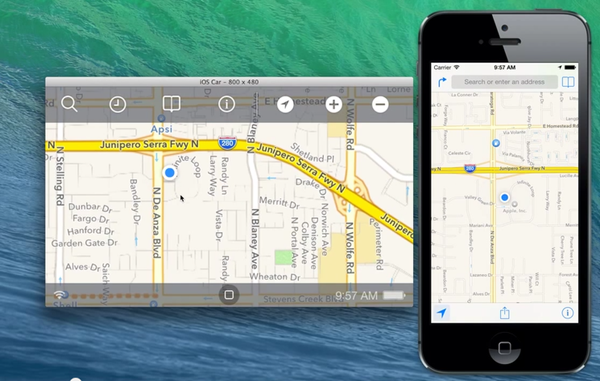 The introduction of Siri, followed by Apple Maps, has laid some decent (although at times, shaky) foundations for iOS in the Car to become a major product in the production car industry. We’ve already seen Apple strike deals with various manufacturers including the likes of Chevrolet, and while it aims to make the experience of driving one infinitely more pleasant, it could also be a game-changer in terms of road safety.

But while, as Troughton-Smith has discovered, iOS in the Car does offer some great features, you also get your list of to-be-expected limitations. There’s no support for multitasking, for example, and the connected display will only show the same as what is on the display of the device itself.

Additionally, and perhaps more importantly, the feature is whitelisted to specific, Apple-made apps, with no current API for developers. Then again, this could just be a part of the building and development progress, with Tim Cook’s company looking to refine things before allowing third parties to get in on the act, so we’ll see how this one plays out. One would hope, however, that before long, other companies can build and push apps tailored for iOS in the car.

At this point, there’s no keyboard interface to speak of, with voice being the only input method. But we’d expect this to change at some point as development continues to progress, and according to Troughton-Smith, the same thing goes for the UI, which is has already been tweaked in the early 7.1 betas.