To me, it seems strange that one would spend vast amounts of money on a premium product like an Apple iPad, but not pony up the money for a decent, official spare charger. Counterfeit charging accessories make big bucks for those behind them, but as a side-by-side tear-down of real vs. bootleg demonstrates, the malpractices involved can lead to fires, minor explosions, and general damage to your prized Apple slate.

As consumers, most of us are aware – or, at least, should be aware – that buying official charging cables and plugs is as much about general safety as it is about protecting the wellbeing of our devices in general. Not only can a poorly-made charger affect the integrity of your device’s battery, but as we’ve seen before, it can damage property and endanger life, and a hands-on inspection of a counterfeit charger by one expert in this field explains precisely why one should proceed with such caution. 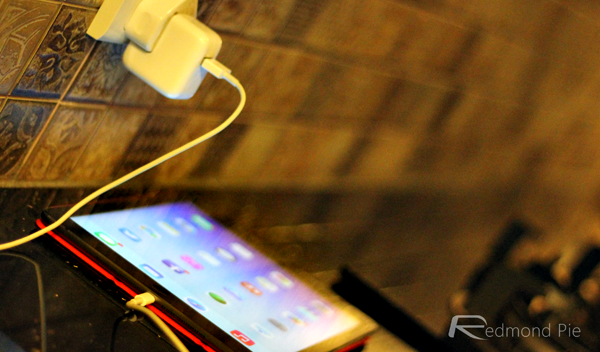 Your official Apple charger is better insulated, which is integral in ensuring that each component runs efficiently and without issue. The counterfeit option demonstrated by engineer Ken Shirriff of Righto, as you may notice, offers bare-bones insulation, which leaves it more susceptible to some of the aforementioned issues, and with the fake only managing to pump out 5.9W compared to the genuine’s 10W, another trade-off of picking up a cheaper option is that it’ll take your iPad twice as long to charge to capacity. 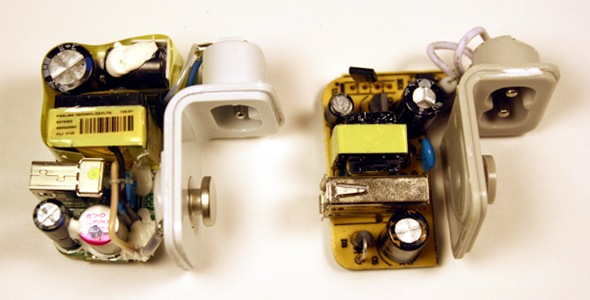 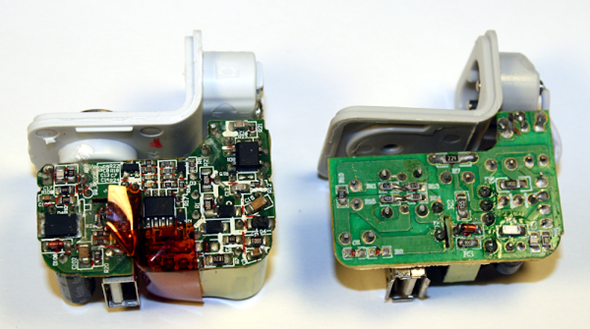 In recent times, Apple has even put the general safety of its consumers over profit in an effort to combat the overwhelmingly common market of these cheap and nasty products. Known as the USB Power Adapter Takeback Program, Apple will safely dispose of any charging cable you feel may present safety issues, while also allowing you to pick up an official unit for a fraction of the usual retail price

Even though the Takeback Program has been in effect for almost a year now, though, not all consumers are aware of it, but if you don’t want to run the risk of any safety issues cropping up, you are very much encouraged to take advantage of Apple’s extended generosity and grab an official, properly-made connector.