The Apple Watch Sport, without beating around the bush, is the bog-standard, entry-level model that will arrive at the cheapest price when it debuts on April 24th. Given that it costs less than the rest of the pack – some of which comfortably reach the tens of thousands if you’re looking at the Watch Edition range – it’s likely to sell in the highest volume, but if you want to grab the Sport variant, you can always spice it with a nicer looking band. The image below illustrates how the Watch and Watch Sport will likely appear when changed up with various different band configurations.

From a technical standpoint, the Apple Watch and Apple Watch Sport are essentially the same thing, but while they may look similar – and thus, you could buy the Sport and possibly make it look like the pricier version with a new band – there are some key differences. 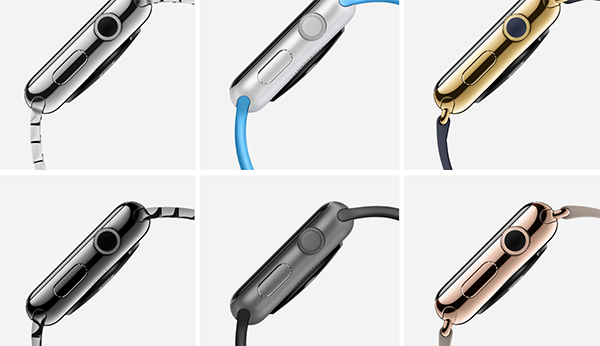 Notably, the Watch Sport is comprised of glass, along with an aluminum casing. It’s a bit rough and ready, hence its “Sport” moniker, and is not built as sturdily as the Watch, which is made of stainless steel, and featuring a sapphire and ceramic backing.

But, given that the Watch is a full $200 more expensive than the Watch Sport, you could feasibly grab the very similar-looking Sport and treat it to a band or strap that gives it a classier finish. The image below, which has surfaced via Reddit, gives you something of an idea of how things could turn out if you decided to mix and match.

As you can see, there is a noticeable difference, but it’s not going to stop people from trying to dodge Apple’s pricing structure by purchasing the Sport and making the changes after the point of sale. We’ve already seen, through a number of campaigns, that start-ups are looking to create adapters that will allow the Watch to be worn with any band, so if you were after the more premium aesthetic for less, you could buy the aluminum Sport, use yours (or Apple’s) higher-end band, and help your $349 model to lose its Sport tag.

These are just mockups, mind, and with Apple offering in-store try-on sessions from April 10th, we’d obviously recommend going and checking things out before you pre-order and part with your money.

Still, where Apple has made a mint from charging hundreds of dollars for trivial upgrades like storage when selling iPhones and MacBooks, there’s definitely room for maneuver as far as the Apple Watch range is concerned, and one suspects that when Apple Watch does launch next month, many consumers will duly oblige.

What do you think, will you be grabbing the Sport and taking things from there? Or did Apple have you at “sapphire and ceramic?” Do leave your comments below!