We’ve known for quite some time that Ryan Petrich is probably one of the hardest working and most productive developers in the jailbreak community, but if we need further proof regarding that notion; a wave of tweaks were released in Cydia bearing his name. Although a lot of the developer’s packages often land on his own private repository for testing purposes, a number of them were pushed out to the main repo for everyone to take advantage of. One of the simplest releases, but one that a lot of users may find useful is the UpsideDown package that pretty does exactly what the name suggests.

When developers are producing and creating apps for iOS, they have the option to allow their apps to support various orientation modes. For those that may not know, Apple recognizes four different orientations, two of which are portrait and two of them are landscape. The most popular orientation on the App Store is more than likely the portrait mode, which means that the app is most comfortable when holding the device upright with the home button located at the bottom. If portrait mode is supported then the UpsideDown tweak unleashes its power. 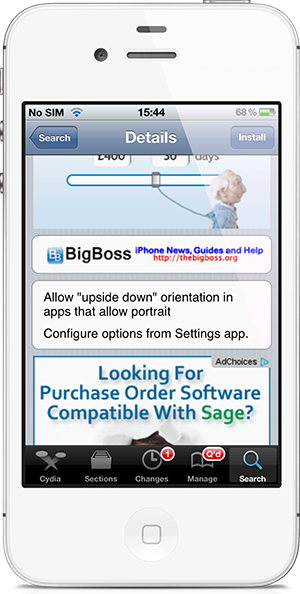 The package forces all portrait capable apps to run in upside-down portrait mode. Which means when the device is turned upside down and the home button is located at the top, the app will auto-rotate itself so that it is still usable. A lot of developers purposely disable this orientation, meaning that the app would normally just look out of place and be unusable until the device is flipped. Not exactly the most earth-shattering of functionality or the most powerful package we have seen Ryan Petrich release, but will still be useful to a lot of users.

UpsideDown also comes with an Aprils Fools Mode that basically exists purely to mess with the ability to use apps. When enabled through the Settings menu, the apps are displayed in the opposite orientation to the device. If the home button is at the bottom then the app is rendered in upside down portrait mode and vice versa. 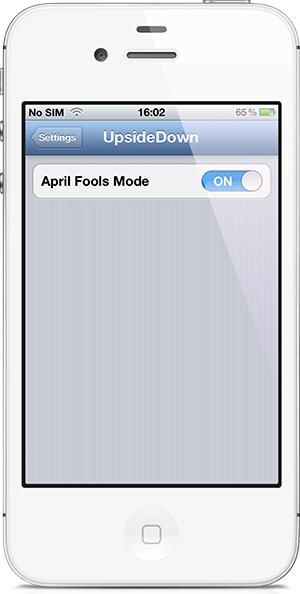 UpsideDown is available as a free of charge download on the BigBoss repository with no specific iOS version requirements being given by developer.