Although preceded by Windows Phone 7.x, the perception is that Windows Phone 8 is Microsoft’s first real stab at today’s mobile market. The experimental phase has now passed, and the Redmond company is all set to launch its assault on Android and iOS with its new improved ecosystem and to begin with, the Surface. Naturally, Microsoft CEO Steve Ballmer has stepped out and criticized his two main rivals, and while he calls the Android ecosystem “wild” and “uncontrolled,” he also states Apple’s iOS is is as highly-priced as it is controlled.

Ballmer was recently interviewed by Reid Hoffman, and as well as talking about the busy past few, and next few months for the Windows maker, the conversation swiftly turned to competitors. Ballmer has never been shy in commenting on the products of rivaling companies – particularly Apple – and didn’t hold back when it came to talking about apps. 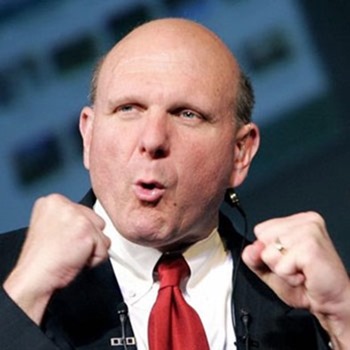 While Windows Phone 8 offers an innovative, new ecosystem compared with the relatively similar look and feel of the Big Two, the number of apps available has been an ongoing cause for concern. While both iOS and Android offer three quarters or a million apps apiece (or thereabouts), Microsoft is currently at around 130,000. With that said, Ballmer firmly believes anybody in the market for a smartphone will be better off with Windows Phone 8 despite its shortcomings, because the issues with the two main players are of much more significance.

He took something of an easy route in slandering the two biggest mobile platforms on the planet. It’s well documented that Android has consistently struggled with malware, and as well as pointing this out, he dubbed the ecosystem “wild” and “uncontrolled.” The “high-priced” and “highly controlled” is of particular concern to Ballmer, who also pointed out that the iPhone can cost in excess of $1,000 internationally.

Ballmer believes Microsoft and Windows Phone 8 can find a happy median between the two. The fact that his company is working closely with developers – unlike both Apple and Google – is a big advantage, according to Ballmer, and he also thinks consumers will really take to products like the Surface.

Ballmer has dropped a few clingers in the past while on record, and to be honest, he doesn’t exactly cover himself in glory this time around. You can catch the audio clip of the interview here: