Apple-1 was the computer Steve Wozniak built in Steve Jobs’ garage, and while it was a true innovation of its time – selling for around $666 – the computer is now an item that only interests fervent Apple fans and collectors only. However, to add this to your collection now requires you to dish out around $0.9 million. However, thanks to Ben Heck – you can now create your very own working Apple-1 replica, if you’re into such projects.

Of the roughly 200 Apple-1 units made, only 50 remain today, and no matter how huge of a geek or a fan your are when it comes to Apple you have to – to put it bluntly – be handsomely rich enough to spare around a million dollars for the machine. 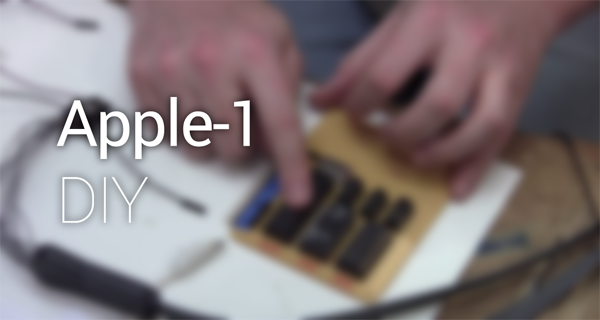 Ben Heck realizes that the Apple-1 ushered in an era of computing where machines could be built cheaply from readily available parts, he has put together a three part YouTube tutorial which shows you how you can use off-the-shelf items, and wire them up together to build your own Apple-1. Apple-1 was originally an 8-bit computer and this DIY will be sticking to that, so there’s a reason why these original units are only good for collection and no real computing anymore.

Of the three part series, currently the first part only has been released and we’re looking at a twenty-minute tutorial here, so the actual time – minus the need to collect the required tools – should easily rob you of your spare weekend time.

It is not the first time an Apple-1 replica has been heard off, with plenty of replicas available online from various modders who have built their own and are selling them for around $150 roughly. You can either grab those if all you want is an Apple-1, or you can pull off a Steve Wozniak, Steve Jobs, and Rob Wayne in one go over the course of your spare time.

Do we have any reader who is into such DIY projects? Do share your experience and opinions about such projects in the comments section below. And also, let us know if you’re going ahead with this particular project. We love to hear from you.