The rare, fully operational Apple-1 we reported as going to auction earlier on this month has just gone under the hammer, and in news that will certainly stun the vast majority of the technology world, has managed to fetch a whopping $671,400.

The machine, which is one of only a handful still available in the world and stands alone as arguably the best kept, was predicted by German auctioneer Uwe Breker to reach a value in the region of between $261,000 to $392,000, and considering the most expensive Apple-1 prior to this auction was $640,400, the record has been smashed considerably by over $30,000.

It is not often that a computer manages to sell for over two-thirds of a million dollars, so what makes this particular Apple-1 such a catch? Well, considering how far Apple has come as a company since the release of the old maestro for $666 (roughly $2,700 in new money), the fascination with memorabilia pertaining to the Cupertino company is naturally at an all-time high. The fruit company is one of the world’s most expensive company, after all, but this Apple-1 has a lot of history attached besides all of its working, original features.

For instance, this particular example of the very first Apple-made computer was owned by Computer Data Systems’ Fred Hatfield, and not only includes the signature of co-founder Steve Wozniak, but also a personal letter to Hatfield from the late Steve Jobs. 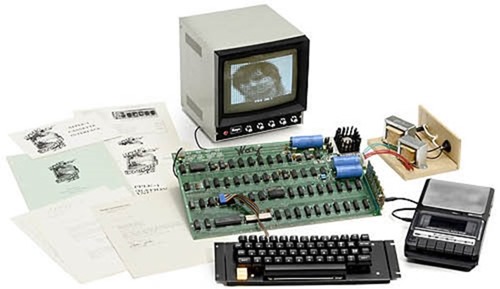 It is an incredible piece of history of an iconic company in tech. space, and the anonymous buyer must really hold the story behind it close to his or her heart. Of course, the kind of money spent on what is, to all intents and purposes, an old computer, is pretty eye-watering for lack of a stronger phrase, but having been lovingly restored to fully working order as described by the auction house, it is not surprising to see the Apple-1 record having been broken once again.

What do you guys make of all this? Does the Apple-1’s history, significance, condition, and closeness to the likes of Jobs and Woz make the jaw-dropping $671,400 valuation seem worth it? Please do leave your comments and thoughts via the usual mediums below – it’s always good to hear from you!