It seems that black and white just doesn’t cut it these days when it comes to smartphones and other portable gadgets. At one point, it would have been almost unheard of that Apple would even consider releasing hardware with multiple color choices, but here we are with the iPhone 5c available in five different vivid options. The iPhone 5s’ colors have also changed, with Silver, Gold and Space Gray options being available at launch time next Friday. That new Space Gray option is likely to be extremely popular, and it has even managed to make itself at home on one of Apple’s iPod nano personal music players.

Inventories within physical Apple Stores have been updated to include the new Space Gray iPods. Furthermore, a reader of ours confirmed that the new Space Gray iPod nano is now available for sale directly through the company’s physical store, sitting nicely alongside the other seven available colors that have been offered for quite some time. In terms of pure functionality and feature sets, the device is no different from any of the other options but it’s always nice for people who are considering the iPhone 5s in Space Gray to check out the look and feel of the color before making that final plunge and ordering it a week today. 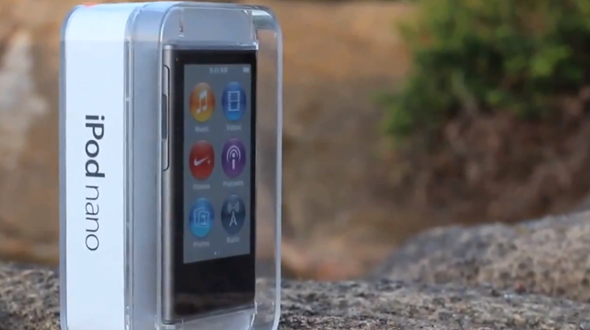 The embedded video is one of the first hands on tour of the new color that we have seen. The quick tour of the product itself reveals that the new Space Gray color will be a direct replacement for Apple’s previously sold Black & Slate products. The transition from iPhone 4s to iPhone 5 saw the pure black device being phased out in favor of the anodized two-tone Black & Slate look. That color option has one again been amended, but it looks like the Space Gray option isn’t too dissimilar from the color that it is replacing.

The Slate Gray color option is also now showing as available on the iPod touch and iPad shuffle through Apple’s online retail store. Stock of the new color option is likely to be limited at first in physical outlets, but it’s definitely worth checking out for those who are waiting patiently for the iPhone 5s and don’t like the look of the Silver or Gold options.

Thanks, Ben for sending this in!