Grand Theft Auto 5 has a cult following really, with the latest re-release of the title for PS4 and Xbox One living it up on our big screens. The blockbuster from Rockstar was also supposed to be featuring a new online mode by now, called ‘Heists’, but it has been delayed for quite some time. Today, Rockstar has made it clear that this new DLC should be available early next year on all platforms, but there is no exact date.

Rockstar has also released a teaser video of this new online mode and it looks absolutely wicked! The entire concept behind GTA 5 Online Heists is to have players collaborate and coordinate with each other as they play specific roles, vital to successfully pulling of, you guessed it, a heist. Rockstar explains that it is pretty much like the single player campaign, just that the in-game characters have been replaced by other online ones. 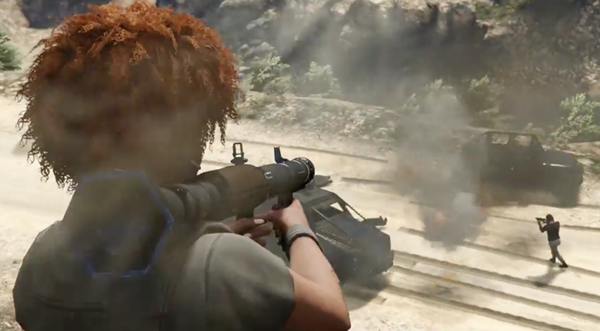 We’ve seen multiplayer scenarios before, but the sheer scale of the map coupled with multiple objectives by taking on specific roles while coordinating with other online players should make for one intense ride.

Apparently what has been delaying the release of Heists is nothing technical, but just the sheer amount of effort required to really make it the prefect experience by combining intensity and complexity both in a bid to offer an experience to players that they have not come across before. For example, one member of a team could be busy performing a role at one end of the map, while the rest of the team members could be at an opposite end performing entirely different roles, but both will culminate into reaching a common end. Heists will be featuring over 20 missions in total, which should give us about 20 hours of gameplay.

The re-mastered GTA 5 has shown us that Ubisoft’s Watch Dogs is not the only game poised at changing the way games are played and how we look at them, where some even say that the title managed to achieve all of that without all the “fuss” that went into making Watch Dogs.

Whenever GTA 5 Online Heists drops, we’ll surely inform our readers about it. Until then, do share your thoughts with us what you think about this DLC.