Google’s Nexus 7 Gets Its Own iPad-Like Smart Cover, Complete With Screen Wake And Sleep [VIDEO]

Two new Smart Cover-like Nexus 7 cases have been outed by a UK accessory retailer, with the two protective options both featuring similar magnet technology that allows the tablet’s screen to be turned on or off based on the case’s position and orientation.

Cases are one of the most used accessories for tablets and smartphones, whilst also possibly being one of the most boring. It’s hard to get too excited about something that’s main function is to throw itself into the face of danger to protect what’s important – your expensive electronic toy. 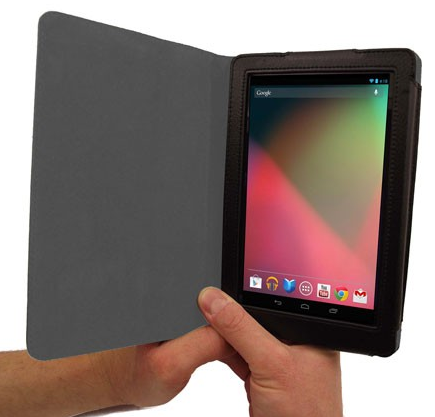 Cases got a little more interesting when Apple unleashed the Smart Cover for the iPad 2, though. More of a flap than an actual case, the Smart Cover protects the face of the device while also allowing easy access to the screen. Just as importantly, though, the Smart Cover has a party trick – it can turn the iPad on or off thanks to a well placed magnet that detects when the cover is in place.

The latest big thing in tablets is Google’s new Nexus 7, and it seems that the search giant forgot to point out that its new 7-incher also packs the same technology as the iPad, allowing Smart Cover-like flaps and cases to be used with the Asus-made tablet.

UK accessory retailer MobileFun has published a video in which the store shows off two such smart solutions, both of which take advantage of the Nexus 7’s ability to be turned on or off by a magnet.

Very similar to Apple’s variants as well as any of the myriad of copycats, these two options both help to protect your new tablet whilst also adding minimal bulk and avoiding the biggest issue that many have with cases – your technology is so well protected you just don’t have easy access to it.

Google’s Nexus 7 has barely been available to buyers for a week, and it has already proved itself to be a hugely popular product. Despite well documented issues with a seemingly high percentage of shipped devices, the Nexus 7 is already set to put the Kindle Fire in the shade over the coming months while simultaneously leaving Apple to ponder whether a 7-inch form factor is something the company should indeed be working to release.