Google To Start Using Your Profile Picture And Name in Ads, Here’s How To Opt Out

With hooks into email, social networking and of course the entire Web, Google knows just about everything there is to know about us, and what we do online.

Which is probably why its latest revisions to its terms of service caused some people to take notice, and after sifting through the wall of heavy and lengthy text, they were presented with one real issue that has been causing something of a stir online.

One of Google’s biggest businesses is its advertising business, and the search giant has plans to use our Google+ profiles in conjunction with its online ads to try and help users make the right choice when clicking ads and links around the Internet.

Called ‘endorsements,’ these personalized ads will amount to ads with Google+ users and their faces appearing alongside AdSense ads. Google says this will help people choose products that their friends like, and avoid those they they don’t and the theory is probably a good one, if you ignore some aspects of it. The problem comes when people start to see their faces show up across the Internet and the old creep-factor starts to reach eleven on the scale. Plenty of people are already wary of Google, and such moves will not help their mood.

Thankfully, turning the whole thing off is a piece of cake. Inside your Google+ profile’s settings, there is a new tick box that lets you to turn endorsements on and off. Turning them off means your photo won’t appear as part of Google’s ads, which is a win for those that don’t like that kind of thing in the first place.

Step 1: To make the magic happen, head on over to the Endorsements section of your Google+ settings, which you can access by clicking on this link.

Step 2: Now, scroll to the very bottom and you’ll see a tick box that says: “Based on my activity, Google may show my name and profile photo in shared endorsements that appear in ads.” Simply uncheck this.

Step 3: Now, hit the big blue save button right next to it and then confirm that you do want to turn Endorsements off. And you’re done. 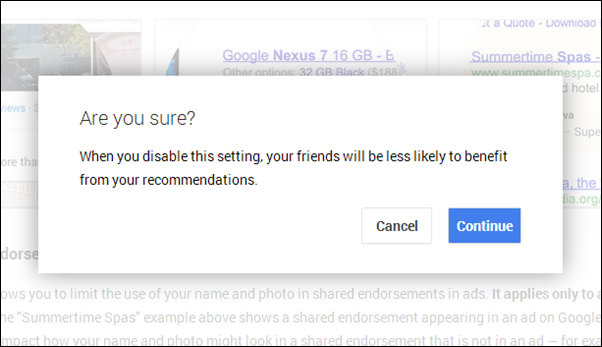