Just when you think that Google couldn’t get any more off the wall, they somehow manage to surprise you. With Google Glass in the pipeline, self-driving cars on the roads and a spring in their step, the boffins at Google just don’t seem to stop trying to change the world, one gadget at a time. Or should that be, one step at a time?

See, Google has today been showing off its latest creation at SXSWi, or South By Southwest Interactive for those of us not in Austin and all clued up on the lingo. That new creation is something we didn’t quite expect to be writing about any time soon, but this is Google, and these are crazy times in the world of technology. 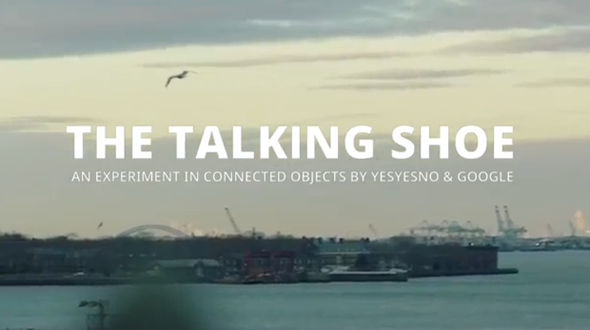 So what’s this product we’re talking about? Well, it’s a talking shoe, of sorts. Well, it talks to other things, not people. Obviously. That’d just be silly.

Dubbed "The Talking Shoe," the footwear tracks users’ movements and then can relay the data to all manner of devices, such as the big screen that was used to demo the product at SXSWi. If people stand still for too long, they get a message that suggests they should perhaps move around a bit more, and there’s positive feedback when they do. It’s all part of Google’s aim to make everyday items more connected, according to the company, while taking the interactive sportswear market to a new level. The likes of Nike already have products that record performance for analyzing later, and Google’s foray into the market will see both technology and use cases change, hopefully for the better.

If Google has its way, it won’t be long before our shoes are posting their own updates to Google+, presumably telling the world how lazy we are rather than how energetic we’ve been, knowing us! Either way, the project comes courtesy of Google’s advertising bias, so we’ll see how it pans out before we get too excited.

What these shoes do show though, is that Google is arguably the most interesting company in Silicon Valley these days, and the search giant is no longer just a company based on links. If Google Glass and self-driving cars didn’t drive home Google’s wish to change the way we work, play and communicate, then these talking shoes should drive the point home.

We’re just not sure where it will lead to.