It seems that the time most definitely feels right for some of the larger tech corporations to start appealing to iPhone users with an iOS keyboard application. Following hot on the heels of Microsoft’s latest Word Flow keyboard release, Google has now joined the iOS keyboard party by introducing its official Gboard keyboard app for iPhone and iPad users. As you might imagine, in addition to offering a text-entry experience that you would expect from any keyboard app, Gboard also places a huge emphasis on allowing users to quickly search for things without ever having to leave the messaging app they are in.

The keyboard is based around the notion of being able to “search and send anything from Google”. Rather than forcing users to leave the app they are in, and to load up Google in Mobile Safari or launch the Google Search app, Google is trying to breed an experience that allows all of that to be done inline. 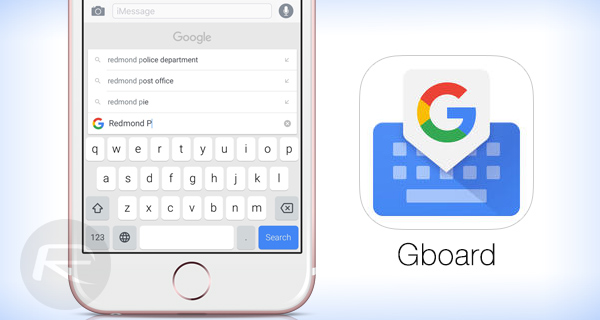 That search experience includes being able to instantly look for nearby stores and restaurants, videos and image files, local weather forecasts, and even news articles relevant to a specific search term. If that’s not enough, then there are sports scores, animated GIFs, and pretty much anything else that you’d use Google for. More so, you can even search for emojis using simple text such as “sad”, “smiling”, “sick”, etc.

Google has also looked a little bit above and beyond just a standard keyboard with built-in search functionality. As with most good keyboards, the behemoth search engine giant has looked at ways to try and improve efficiency when typing. Like a lot of other third-party keyboard experiences, Google’s engineers have settled for introducing the ability to slide or swipe a finger quickly between keys to be able to efficiently input text, calling it “Glide Typing”. The aim here is to facilitate faster typing by allowing the user to “glide” from key-to-key. Some people will love this method of input, and others won’t, but thankfully it doesn’t take away the standard method of typing text with individual key presses. 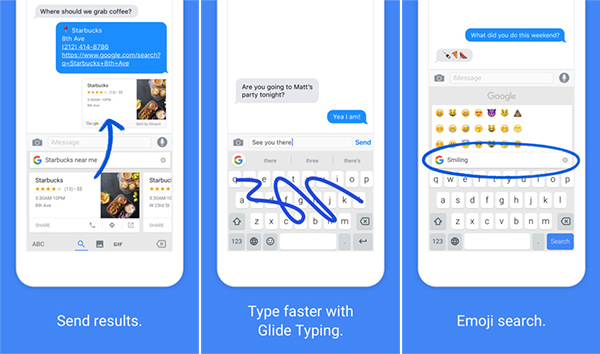 From a privacy and data usage perspective, anyone who thinks that Google is not to be trusted with the type of data that the company records and how it’s actually used, might want to check out the “What Gboard sends to Google” section of the iTunes metadata before downloading and providing full access permission to this keyboard extension.

(Download: Gboard for iPhone and iPad from the App Store)