Google’s Play Store has just reached an incredible 25 billion downloads, and in order to share the celebratory mood with its hundreds of millions of users, Google has teamed up with some of the biggest app houses to offer a selection of titles for just a quarter.

That’s right, for a limited time only, you can pick up some of your favorites from the likes of  Electronic Arts, Rovio, Gameloft, Electronic Arts, runtastic, and Full Fat – among many others – for just $0.25, making them by far the cheapest paid apps you could possibly find on any platform.

As well as the incredible milestone, there are now 675,000 apps and games available on the Google Play Store, and considering Apple announced it was in excess of 700,000 just last week, it seems only a matter of time before the Play Store becomes the number one in terms of sheer app count.

Google Play Store began its life as the Android Market, but in order to more accurately reflect the range of content available, was re-branded earlier this year. Considering Google only reached the 5 and 10 billion marks at either end of last year, the exponential rise in downloads is plain for all to see. Its open source nature means it’ll soon become the biggest app portal on the planet, and although developers tend to favor Apple’s iTunes App Store, that may not be the case at Android’s current growth rate.

The offers will be limited-time only, and there will be a different batch of 25 cent apps every day. The first bundle will be added to the store later today according to Google, so make sure you keep your eyes open for the flurry of specials during the next few days. 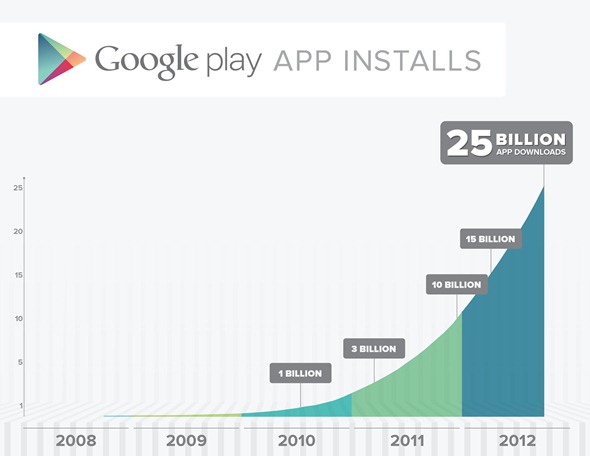 As well as the cheaper games, Google plans to run even more promotion on its other content, including eBooks, movies, and music. Lists such as “25 movies you must own,” will begin running, and although we’re not predicting those to sell for $0.25 necessarily, expect significant saving versus their usual retail prices.

It’s worth noting that much of the Play Store’s apps come in the free form of the paid, full title, so the App Store will still be ahead in terms of quality for some time, but Google’s determination is really starting to pay dividends.