Back in June, Apple unveiled iOS 6 with much fan fair: the release included great long-expected additions, which included the big surprise of ditching Google Maps for Apple’s own system. While great additions were brought to the table, Maps in sixth generation iOS has had its own share of post-launch issues and inaccuracies (for London users, as an example, all of the Underground stations magically disappeared from an iOS version to another). Google has seized this opportunity to bring back its Maps to the iPhone, this time as a standalone map. Overall, we think you should give it a look.

The new Google Maps for iPhone 5 and iOS 6 includes a fresh but familiar new look. So familiar, in fact, that it seems to have been almost exclusively modeled after iOS 6’s native Maps app, only with Google’s traditional minimalistic design. This is not necessarily negative, in our view, since previous users of the native maps app will feel right at home. 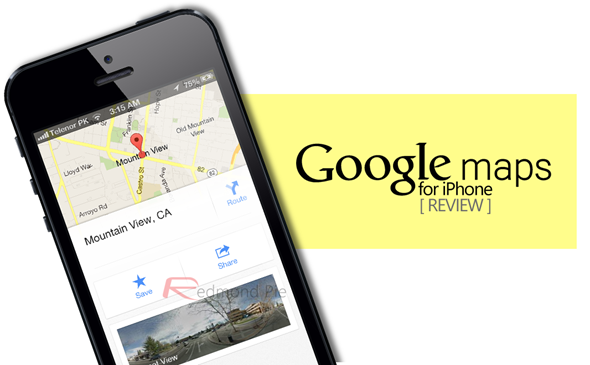 Everything that we expected from a standard maps application is in fact there. There’s smooth navigation (aided by multi-touch gestures such as zooming and pinching), basic spots are accurately presented (unlike on, erm, other apps) and satellite view is included. All of this works as you would expect.

It is also easy to view business reviews and information about different locations, such as hospitals and train stations: and it’s displayed in a manner that it doesn’t take you away from the main view. It is easy to refer this information to others by messaging or emailing, much like the native iOS Maps app. Traffic and public transport information (Transit) is also easily accessible by bringing up the options panel on the right.

Should you wish, you can login with your Google account and store frequent locations, as well as key ones such as “Home” and “Work”. This will make it easier to find directions, which we will look at below.

The main use of a maps app is to display directions from one location to another, and as you might expect, Google Maps implements this well, whether it’s for driving, public transport or walking. After conducting a search, a list of possible locations is displayed – it won’t try to assume a particular one – and then a list of possible routes, if applicable. This gives the user enough control, but at the same time it’s not at all intrusive.

Unlike Apple’s alternative, Google Maps does not include 3D maps, yet it includes the much more useful Street View which many have missed and vector-based 3D structures, again, I wouldn’t classify this as 3D like how Apple offers them, but it is available via a companion app, which is Google Earth. Street View can be found by simply tapping and holding a certain location and choosing the “Street View” option from the details panel. From there, you’re free to navigate anywhere around your town, city, country or even the world!

Overall, this is an excellent release, but we are missing some features that we would like to have in this app.

There is no offline map viewing in Google Maps for iPhone, but it can be found on its Android counterpart. This is not a huge issue, but we’re hoping to see it implemented in a future update. Caching of already-viewed locations is there, but it would’ve been really great if we could cache a certain area of our liking on the device later for offline viewing, much like how it is possible on Android by simply typing in a city name – or area – and caching the map on the device for later viewing.

Overall, we’re quite impressed by this release. If you’re unsatisfied with Apple’s new native Maps app, which has caused a huge hassle to many people, I encourage you to give this one a try. Who knows, you might just end up once again relying on your iPhone for finding your way around, without ending up on a dead-end street.

Google Maps for iOS is available on the iPhone 3GS and newer, as well as the iPad and the 3rd-Generation iPod touch or newer. It requires iOS 5.1 or above to be installed on the device. Keep in mind that Google Maps app is not universal, hence there’s no iPad support and the app will run in compatibility mode, but a native iPad app is in the pipeline for future release.