Apple may have introduced its own mapping service with the release of iOS 6, but that hasn’t stopped Google Maps from being one of the most popular apps on the iOS App Store. It also hasn’t deterred the Alphabet-owned company from investing engineering and financial resources into continually updating the iOS version of Google Maps with new and innovative functionality. The latest update, which is available right now on the App Store, takes Google Maps for iOS to version 4.18.0, and brings additional user preference settings as well as a brand new Travel Times Today extension that can be accessed through the Notification Center.

Google Maps is barely recognizable from the app experience that used to ship as stock offering within iOS before Apple moved across to its own vector-based Apple Maps nearly four years ago. In that time, Google has turned its Maps app into an absolute monster of a mapping and navigational solution that pretty much covers all the needs of the everyday traveler, and is pretty much the go-to-app for maps across a range of devices, including iPhones and iPads. At least we thought it did, until this latest update introduced the excellent Travel Times Today extension. 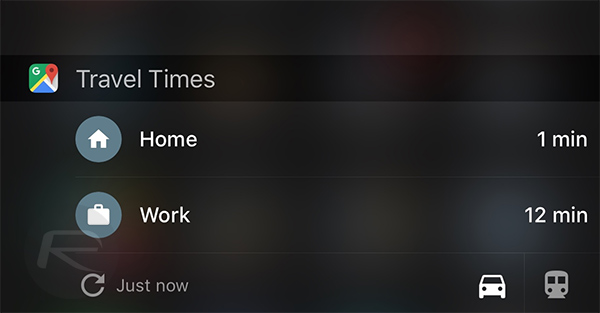 The main part of this update is the integration of a new iOS extension that allows users to instantly check local traffic on their route to/from a saved home address or work. The functionality within this extension is fairly limited, and is clearly governed by what is and what isn’t allowed with this type of technology in Apple’s Developer Guidelines, but it’s most definitely a useful tool in the arsenal of the frequent Google Maps app user who uses the app a lot when commuting to or from work and home.

Use the Travel Times Today Extension to quickly check traffic on the way to home and/or work (requires home/work to be saved).
Easily share directions with your contacts.
Night mode and distance units settings in navigation.

Google has also added additional Navigation Settings including a much useful Night mode. There’s also the added ability to share directions with any of your contacts. Of course, the latest update also includes the obligatory bug fixes and general under-the-hood improvements to the underlying codebase to try and make the whole Maps experience a lot more pleasurable and stable for the end-user. 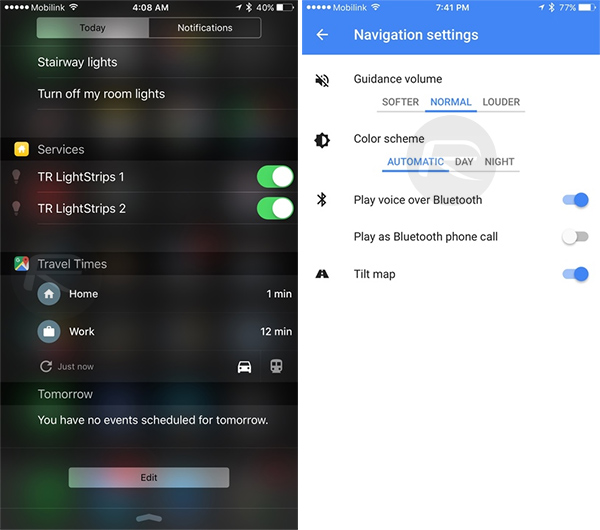 Google Maps may no longer ship as a default installation on the iPhone, but that doesn’t mean it isn’t a serious contender to the Apple Maps throne within the ecosystem. The latest update may not seem like an instant home-run until you try it out for yourself, but it’s been frequent updates like these that have taken the software to where it is today.

(Download: Google Maps for iPhone and iPad from the App Store)