When Google announced its new Chromecast streaming dongle, the response amongst the technology world was split into two camps. Some shrugged their shoulders and said that it did nothing that Apple’s Apple TV and AirPlay didn’t already do. Others lauded the possibilities created by Google’s cross-platform approach to something that had previously been an Apple-only affair. We sat somewhere in the middle of those two options, but now we’re getting more excited, and with good reason.

That reason, as is so often the case, is that the modding community has taken the bull by the horns by successfully rooting the Chromecast, mere days after it was announced.

Google’s $35 streaming dongle is already the star of a YouTube video showing that the device is already able to be rooted – potentially opening the doors to all kinds of possibilities. Google has never really been known for tying down any of its technologies too hard, and Android is already one of the most open operating systems on the planet, both in a good and a bad way.

According to GTV Hacker, the Chromecast has only been rooted enough to confirm that the device does not run Chrome OS, but is actually a modified version of the Google TV operating system, which in itself is a modified version of Android, with some of the inner workings removed. It is still obviously very early days in the Chromecast hacking scene, but this is sure to be the start of all kinds of weird and wonderful things for the little HDMI stick. 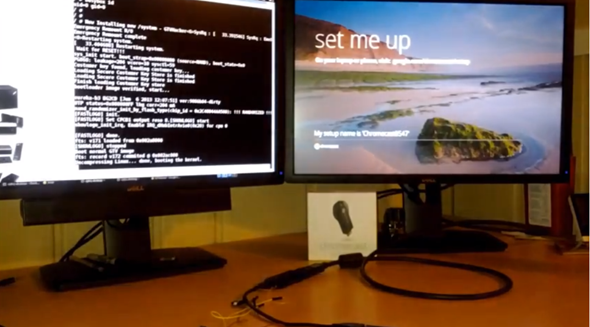 As it ships, the Chromecast is a way for users of just about any platform as well as the Chrome web browser to take content and display it on a television equipped with one of Google’s new sticks. The fact that the device has Wi-Fi built in means that it could potentially be a big player in the homebrew video and audio streaming scene, just as the original Apple TV and the first Xbox did.

Those of you feeling adventurous can go ahead and root the device by following the instructions over at GTVHacker’s Wiki page.