Microsoft has just announced launch titles for games which are going to be available this fall on Xbox LIVE for Windows Phone 7. It should be no secret now that Microsoft is going to heavily rely on its already popular and established Xbox platform to bring firepower to this new mobile platform. Official list of launch titles for Xbox LIVE on Windows Phone 7 are as follows: 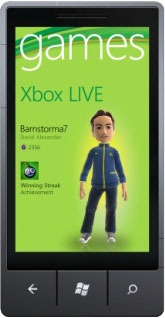 When we talk about gaming on a handheld devices, the iPhone, iPod touch and iPad are without any doubt the best in the market today, and other platforms such as Windows Mobile 6.x, Android and Symbian have always lacked quality games. But it looks like Microsoft has some different plans this time around when these devices goes into consumer hands this fall.

Folks at Engadget went hands-on with it and needless to say, they were quite impressed with this yet to be released platform.

Live on WP7 will allow for full avatar integration (we’re talking fully rendered, interactive avatars) along with customization (clothes, accessories, and more). The company has even crafted an avatar-centric version of familiar phone utilities like flashlight apps and levels, adding some whimsy to what would normally be pretty staid affairs. Additionally, messaging, friend lists / status, achievements, and leaderboards (with friend comparisons) are all here as well, making for a pretty complete mobile Xbox Live experience. And also just like the console, every game will have a try-before-you buy demo to check out before spending your hard-earned cash.

Gaming on Windows Phone 7 surely looks promising. So what do you guys think about this? Will WP7 give Apple a run for it’s money? Will it compete and take Apple head on in the mobile gaming sector? Let us know your thoughts on this in the comments section below.