While addressing graduates at Hampton University on Sunday, US President Barack Obama in his speech said that the era of iPads, iPods, Xboxes and PlayStations are a source of distraction, rather than a tool of democracy for the United States. This statement of Obama, which was reported by AFP is as follows. 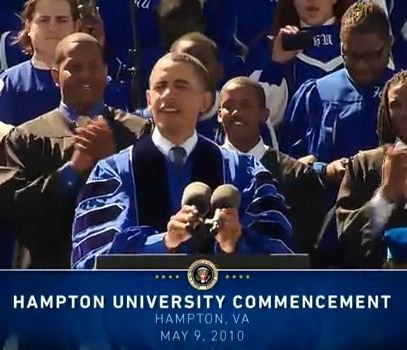 You’re coming of age in a 24/7 media environment that bombards us with all kinds of content and exposes us to all kinds of arguments, some of which don’t always rank all that high on the truth meter.

With iPods and iPads and Xboxes and PlayStations, — none of which I know how to work — information becomes a distraction, a diversion, a form of entertainment, rather than a tool of empowerment, rather than the means of emancipation.

Education… can fortify you, as it did earlier generations, to meet the tests of your own time.

Here is the video of Obama’s commencement address at Hampton University in Hampton, Virginia.

So what do you think about this? Is the most social media savvy U.S. President (Obama) of all time right about all these gadgets making our problems worse? Let us know your thoughts in the comments section below. [via Mashable]