Samsung fans have plenty to look forward to this side of the summer, and the Korean company’s Vice President has stepped out and confirmed the Galaxy Note 8.0 is to be unveiled at Mobile World Congress (MWC) 2013, which commences from 25th February. Perhaps the biggest date in the tech calendar besides CES, we’ll be seeing plenty of new and exciting mobile gadgetry at the big event in little over a month, and although the Galaxy S IV will not be rearing its head late next month, Samsung’s VP JK Shin has noted it will be arriving ‘soon’.

As much as we’re excited about the prospect of the Galaxy Note 8.0  – which has been touted for an MWC arrival by various sources during the course of the past few days – there’s no question that the Galaxy S series is Samsung’s most significant contribution to the ever-growing mobile market. We could fill a book up with the various rumors and suppositions created by analysts and experts over the past few months or so, and it’s fair to say the S IV – like the S III last year – has a significant amount of pressure on its shoulders to impress the tens of millions of Android users waiting on its arrival. 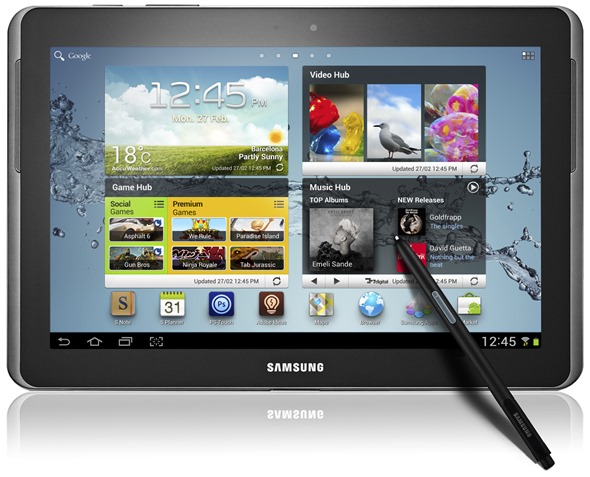 Meanwhile, Samsung has felt inclined to add an 8-inch model to its immensely-popular Galaxy Note series, although as many of you will already know, this edition won’t be a hybrid ‘phablet’ device (combining the features of a smartphone with a large form factor, but an out-and-out tablet. In a sense, it’s a little tactical rebranding on the part of Samsung, and as with the Galaxy Note 10.1, is merely a renamed and enhanced Galaxy Tab of old.

Samsung hasn’t confirmed the specs of the Galaxy Note 8.0, but it would seem a certainty that Android 4.2 Jelly Bean will be on board. The 8-inch display is expected to pack a resolution of 1280×800, while the interiors will likely be beefed out with a 1.6GHz quad-core processor 2 gigs of RAM, and 16GB or 32GB of internal storage – depending on which configuration you decide on.

Should we hear any news with regards to the Samsung Galaxy S IV, we’ll be sure to let you guys know, so stay tuned!

You can follow us on Twitter, add us to your circle on Google+ or like our Facebook page to keep yourself updated on all the latest from Microsoft, Google, Apple and the web.code below.