Samsung’s Galaxy S series may be considered the flagship, but the ‘phablet’ Galaxy Note line has also risen to prominence over the past couple of years, and in actual fact, many Samsung Galaxy fans prefer the substantially larger model. As such, anticipation for the Galaxy Note 3 is approaching fever pitch, and if you happen to be a tad bit excited about the prospect of its release, I’m sure you’ll be impressed by the just-leaked benchmark scores. As you might have expected, the GT-N7200 managed a very respectable score in excess of the 27,000 mark, and on top of that, it now looks certain the handset will be running on the next edition of Google’s Android. Details coming up after the drop.

I’ve spoken to many Galaxy Note fans, many of whom have been left indifferent after seeing the Galaxy S4. Suffice to say, the army of phablet fanatics are expecting big things from the big device, and judging by these leaked benchmarks, its Korean maker will be more than delivering the goods.

Of course, these Galaxy Note 3 benchmarks, which have been spotted on AnTuTu, could quite easily have been faked, so while we’re taking this with a pinch of salt, we wouldn’t be fulfilling our duties if we didn’t investigate.

The model number found on the AnTuTu benchmark chart is the GT-N7200, and considering the Note 2 was the GT-N7100, you can see how the supposition has been made.

Said device runs Android 4.3 Jelly Bean and a processor clocked at up to 1.6GHz. Although it’s widely presumed to be running the Exynos 5 Octa core processor found in some versions of the Galaxy S4, this cannot be confirmed, but with a score of 27,000 compared with the S4’s 31,000 points, it’s certainly no pushover in the hardware department. Also, since the Note 3 is, we presume, unfinished, there’s definitely scope for that number to increase further. 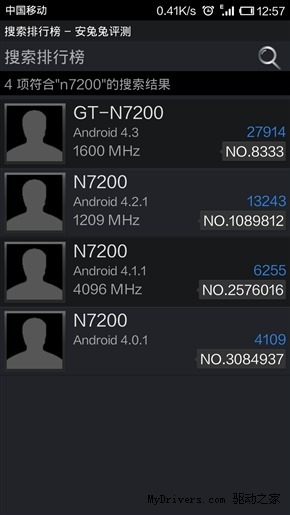 Until we see or hear something a little more concrete, we’re going to be reserving judgment on this, but if this leak is indeed indicative of the eventual product, I think it’s safe to say we’ll be seeing yet another powerful, Galaxy S-like feature set with the third Galaxy Note release.