Samsung has never been afraid to push the boundaries in the mobile industry, particularly when it comes to display size, and with the Galaxy Note 3 set to pack a panel in excess of 5.5 inches, a leaked render of the alleged Galaxy Note 12.2 – which was originally thought of as a 12-inch tablet PC – has just been spotted in the wild. With numerous vendors said to be preparing larger tablets as we get to what can be very much described as the "hardware end" of the tech calendar, we expect the Korean company to be in amongst the announcements, and although the Galaxy Note 12.2 is still very much at the rumor stage, the shots present a very elegant, naturally large device.

The Note 3, along with the Galaxy Gear smartwatch, will no doubt be two of Samsung’s biggest exports as we close in on this year’s IFA trade show in Berlin. Having said that, we’re not accustomed to seeing one or two products manifest from Samsung at a time, and with Windows 8.1 also on the horizon, we expect a plethora of new hardware from the industry’s power releaser.

Last year, the trend was very much in bringing smaller, circa 7-inch slates to the consumer market, and while plenty of prospective tablet owners still seek this compact form factor, the popularity of so-called "phablet" smartphones suggest there will also be a market for the super-sized slab.

The Galaxy Note 12.2 will apparently carry the model number SM-P900, although aside from that and the new render, precious little else is currently known of the device. With the "Note" moniker, we can presume it will probably rock an S Pen, and with such a large display, some reports have suggested a resolution of 2560×1600, which would certainly be sharp. 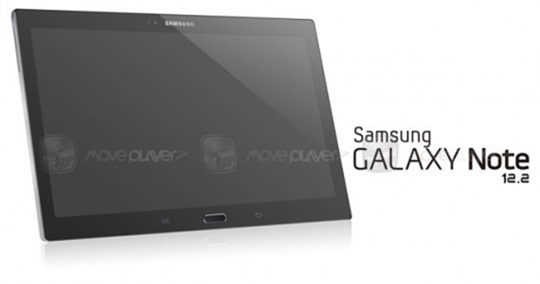 IFA, which will be the centerpiece of the early fall announcements, commences this week, and will hopefully put to bed at least some of the many rumors currently doing the rounds. Although it may seem rather far-fetched given the lack of information we have at this moment, it may well be that Samsung plans to unveil the Galaxy Note 12.2 at some point this week.

Whatever the case, we’ll keep you informed on all of IFA’s major stories and announcements, more specifically Samsung Unpacked 2013, so stay tuned!