Phablet fans will undoubtedly already have September 4th penciled into their diaries, for it is the date when Samsung will be unveiling the Galaxy Note 3. But while we’re pretty sure the device will borrow its design (and a large portion of its hardware) from the flagship Galaxy S4, the prospect of the Korean company unveiling its very first smart watch effort has us even more excited. The so-called Galaxy Gear, which would be the first smart watch to market from any of the ‘big’ names in tech, remains rather elusive, but based upon some early patent drawings, T3 has come up with a rather beautiful concept of the wearable gizmo.

At this point of the year, we have to begin making some big decisions, and since many of us are pondering which next-gen console to choose, which iPhone to eye up, or whether we want to put a little aside for Google Glass early next year, is there really much room in our hearts (or our wallets) for a smart watch?

The viability of the market is unquestionable, thanks mainly to the exceedingly popular Pebble Smartwatch, and while we don’t yet know whether the Galaxy Gear is definitely arriving — let alone what it will look like or be capable of — it’s hard not to get a little bit wide-eyed.

If you weren’t already intrigued by the Galaxy Gear, the 3D render clip compiled by T3 may just tip the balance, because, simply put, it’s beautiful. With a curved, flexible display and consistent width all the way around, it gives off the air of a bangle or bracelet, but while this doesn’t sound like much of a geek’s dream, the concept video suggests otherwise. It’s slick enough to appeal to the techie, but at the same time, remains rather subtle and inconspicuous, so as to pique the interests of the general population. 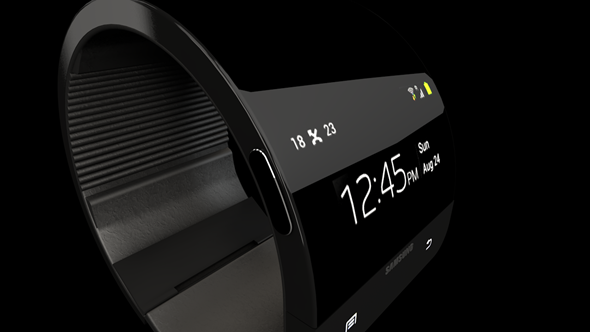 The Galaxy Gear concept allows the user to check and respond to messages while syncing with other Android devices, and when that aforementioned display is rolled out flat, it offers an almost full-on Jelly Bean experience on a 3.5-inch screen.

Although we are certainly enthused by the prospect of the Galaxy Gear, we don’t expect the device to go quite this far in impressing us. Nevertheless, we certainly wish it were real, and you can check out the drool-worth clip just below.

If, hypothetically speaking, this were the Galaxy Gear, would you buy it at the right price? Feel free to leave your thoughts below, but needless to say, consider us very much sold!

Thanks, Rhiain for the hat tip!