Fully Unlocked Moto X Can Be Picked Up For Just $299, Here’s How!

The deals are certainly rolling through for the ravenous tech community this week, and off the back of news that a refurbished MacBook Air could be snapped up for a mere $599, those on the hunt for a new smartphone may be interested in a one-day price-drop on the Moto X smartphone. Running Google’s Android, it’s been compared with the Nexus line-up in that it’s both cheap and relatively high-end, and for a 24-hour period, the device is available off-contract for just $299.

Motorola has thrown out the deal to celebrate Mother’s Day, and even though it would be a nice gesture of you to make the purchase for the woman that brought you into this earth, there’s certainly no harm in taking advantage and grabbing one for yourself. 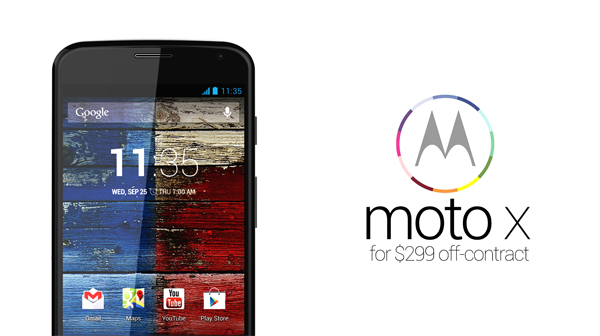 The sub-$300 offer applies to the entry-level 16GB model, which, at $299.99, is a $50 saving on the regular retail price. Given that it’s already a pretty good deal even without the discount, this is one particular sale that consumers won’t want to miss, and if you are interested in grabbing a Moto X at a lower cost, then you shouldn’t delay.

The sale runs until 11:59 p.m. E.T. on May 1st, after which, it’s back to normal pricing, and while the 16GB model is, for the next few hours, probably the best-value device on the market, there are even better savings to be had on the 32GB and Developer Editions.

Similarly, the Developer Edition, which also has a regular retail price of $399.99, is also $324.99, so if you feel like you want to be a little more experimental and get hacking, this is definitely the option you’ll want to take.

Even though the Moto X has been around the block, it’s still a very solid handset, and for this kind of price, you’d struggle to find better value for money anywhere.

If you’re looking for a new Android handset for good value, then it’s best not to waste any time further and hit the source link below.