Windows Phone Mango has been finalized and is all ready to be implemented by smartphone manufacturers on new devices. Fujitsu Toshiba Mobile is the first manufacturer to step up to the plate by launching the first ever Mango-powered smartphone to Japanese customers, and perhaps soon in other countries all across the world. 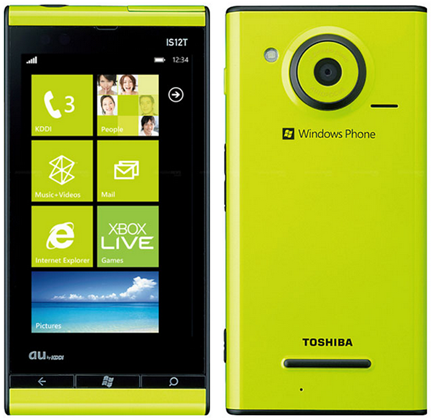 The Windows Phone IS12T, as it’s called, seems to be a bare-bone Windows Phone 7 ‘Mango’ device, with no modifications to the system of any kind, which is often appreciated by enthusiasts who enjoy customizing the operating system themselves. All the benefits of Mango are there, including very good built-in social networking support, Internet Explorer 9 Mobile and multimedia playback capabilities, as explained in a press release issued by Fujitsu:

the smartphone is equipped with essential features, including fully integrated social media capabilities such as Facebook and Twitter, a video and audio player, and a variety of other entertainment applications.

Hardware-wise, this device is rather impressive, including several specifications that are above what users would expect on a today’s smartphones. The IS12T includes a 13.2-megapixel camera, 32GB of internal storage, but more importantly, a feature that many of us on the go will love: it’s waterproof and dust-resistant. While Fujitsu cautions that this device can’t be used underwater or left in the sand for an extended period of time, or be in contact with salt or pool water, it should save users from an unpleasant trip to the store after accidentally dropping the device in a puddle or on the ground.

IPX5/8 water resistance: Please ensure that the cap and battery covers are firmly closed. Users should refrain from immersion in seawater, pool water, and hot spring water. Users should also refrain from using while bathing in hot springs or water using bath salts, as well as extended use in water.

The IS12T will be available starting on August 25th in Japan through KDDI Corporation and Okinawa Cellular Telephone Company. It will be available in three colors: Citrus (a greenish yellow), Magenta and Black. There’s no word on international availability just yet.

Windows Phone 7 is Microsoft’s latest endeavor in the smartphone market, part of the company’s effort to renew its once-dominant mobile platform. Released less than 1 year ago, Windows Phone 7 was built from the ground up to be interacted with using multitouch, similarly to other modern mobile platforms, and includes much deeper social integration.