Great news for fruit slicing n’ dicing fans from all over the globe: Fruit Ninja is coming to the Xbox 360 with Kinect integration this Wednesday.

Fruit Ninja is a video game in which players slice fruits by swiping on their device’s touch screen. Developed by Halfbrick, the game is available for a variety of platforms such as iOS, Android, Windows Phone 7, Bada OS and Nokia’s Symbian. It is one of the most popular video games in the portable gaming market having seen more than 20 million total downloads as of March, 2011.

Announced at E3 2011, Fruit Ninja’s first appearance on Microsoft’s Xbox 360 is all set for a release on Wednesday, August 10th. It is titled Fruit Ninja Kinect and will, as you can tell from the title, have deep integration with Microsoft’s motion sensing Kinect device. All the slicing action which was previously limited to input from a finger will now take input from the entire hand/arm of the players; this will not only make Fruit Ninja a lot more fun but also make it a whole lot more tiring than it ever was (which is not a bad thing, really!). 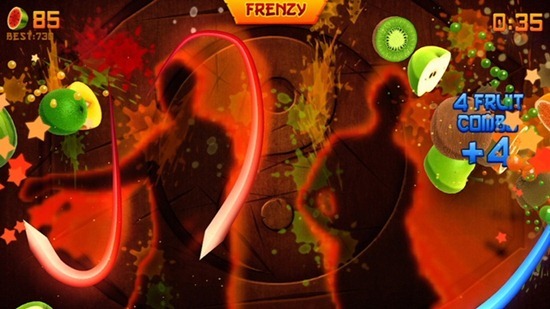 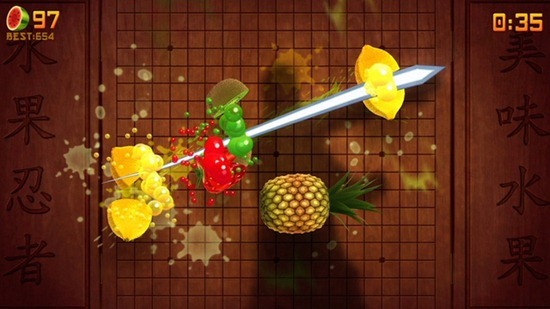 Fruit Ninja Kinect will come with all the usual modes such as Classic, Zen and Arcade. In addition, it will have something that’s missing from its iterations on touch-screen devices, or more precisely, from the Windows Phone 7 version of Fruit Ninja: multiplayer. Multiplayer on Fruit Ninja was previously limited to comparing scores with friends but now you can play side-by-side with your friends and family which, we think, ought to make Fruit Ninja Kinect the perfect party game.

YOU are the ninja! The worldwide gaming phenomenon Fruit Ninja has now arrived for Kinect! Your arms are now blades, and the epic battle against the world’s most delicious produce is just beginning. Fruit Ninja Kinect is an amazing evolution of the slice-em-up genre created by Halfbrick, utlising next-gen power for the juiciest combat ever! With Classic, Zen and the frenetic Arcade Mode, Fruit Ninja Kinect includes all the action you know and love with precision control – along with special features exclusive to Kinect! With Party Mode, multiple players can turn a normal night into a fierce tournament – and the new Challenge system will reveal the true masters among your friends!

Fruit Ninja Kinect will be a download-only title and as such will be available from Xbox Live Marketplace. It will cost 800 Microsoft Points ($10) when it debuts this Wednesday.

If you’re willing to wait till September 13th, you can buy Fruit Ninja Kinect along with the upcoming on-rails shooter The Gunstringer for $30 which will net you a disc and a download code for Fruit Ninja Kinect.